Russian President Vladimir Putin has called for efforts to establish a system of comprehensive economic cooperation encompassing the Asia Pacific and Eurasian regions, asking South Korea and other countries to actively join the vision.

Putin made the appeal in his op-ed piece to Yonhap News Agency ahead of the Asia Pacific Economic Cooperation summit to be held in Vietnam on Nov. 10 and 11.

"As a major Eurasian power with vast Far Eastern territories that boast significant potential, Russia has a stake in the successful future of the Asia Pacific region, and in promoting sustainable and comprehensive growth throughout its entire territory," the Russian president said.

"We believe that effective economic integration based on the principles of openness, mutual benefit and the universal rules of the World Trade Organization is the primary means of achieving this goal," he added. 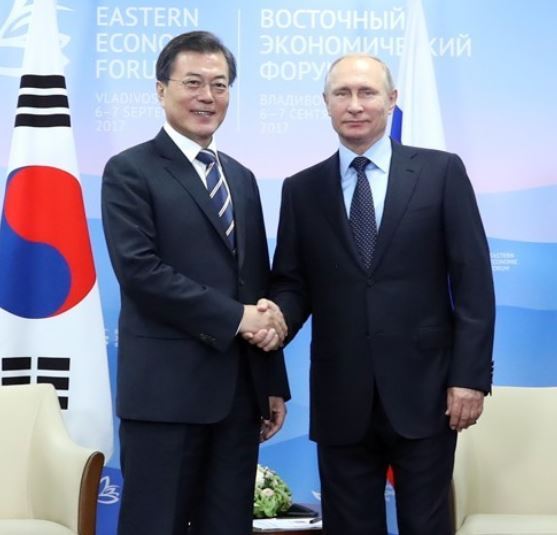 "We suggested forming it on the basis of the Eurasian Economic Union and China's Belt and Road initiative. To reiterate, this is a flexible modern project open to other participants," he said.

Putin hoped to integrate Russia's Siberian and Far Eastern territories into the Asia Pacific market. In particular, he attached importance to developing the country's Far East.

"We are talking about creating territories of advanced economic growth in that region, pursuing large-scale development of natural resources, and supporting advanced high-tech industries, as well as investing in human capital, education and healthcare, and forming competitive research centers," he said.

He also espoused the idea of building comprehensive infrastructure, saying that it would serve as a "basis for effective integration" and noting that Moscow is open to participation by other countries in related projects.

"We are committed to implementing bilateral and multilateral infrastructure projects which will link our economies and markets. Among other projects, I am referring to the Energy Super Ring that unites Russia, China, Japan, and the Republic of Korea, and the Sakhalin-Hokkaido transport link," he added.

The Energy Super Ring is a project aimed at building a huge electricity transmission grid in Northeast Asia. Attending a forum in Vladivostok in September, South Korean President Moon Jae-in expressed support for the project, saying it would help the creation of "the world's largest energy community."

"We support the idea of forming an Asia Pacific free trade area. We believe this is in our practical interest and represents an opportunity to strengthen our positions in the rapidly growing APR markets," he said. APR stands for Asia Pacific region.

"I want to note that over the past five years, the share of APEC economies in Russia's foreign trade has increased from 23 to 31 percent, and from 17 to 24 percent in exports. And we have no intention of stopping there," he added. (Yonhap)