[ The Korea Herald – Send E-mail ]
[Herald Interview] Trump’s ‘my way or highway’ approach to FTA ineffective: expert
James Bacchus says Koreans are simply buying less, while Americans are buying more
By Julie Kim Jackson
Published : Nov 8, 2017 - 16:36
Updated : Nov 8, 2017 - 18:19
During his two-day state visit to Korea on Tuesday and Wednesday, US President Donald Trump spared no opportunity to stress his economic crusade to reduce US trade deficits. Trump revealed Seoul will be buying billions of dollars’ worth of American military equipment, while calling the Korea-US Free Trade Agreement “not very good for the United States.”

Although Washington has continuously cited its growing trade deficit with Korea as the main reason behind its discontent with the agreement in the past year, many economists point out that trade deficits should not be used as a basis to alter or revise trade deals.

“Fundamentally, trade deficits have very little to do with trade agreements. The bilateral trade deficits the United States has now with Korea has been described by every economist that I know and heard, as happening for basically two reasons: One is the recent slow growth in Korea, and the other is the recent faster growth in the United States,” said James Bacchus, director of the Center for Global Economic and Environmental Opportunity of the University of Central Florida, during an interview with The Korea Herald in Seoul. 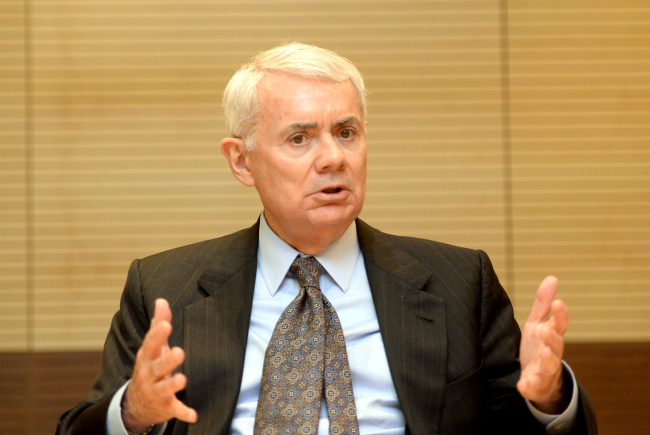 James Bacchus, director of the Center for Global Economic and Environmental Opportunity, speaks during an interview with The Korea Herald at Coex in Seoul on Monday. (Park Hyun-koo/The Korea Herald)
“Koreans are buying less and Americans are buying more. This tends to lead to more Korean imports into the United States, and less US exports into Korea,” Bacchus says. “KORUS is not to blame for the trade deficit, nor can any change in KORUS really affect the fundamental macroeconomic issues that are at the heart of the trade deficit. There’s nothing President Trump can do to change that.”

Bacchus has worked as a global advocate for economic, environmental and other issues of global governance and concern and is a former chief judge on the Appellate Body of the World Trade Organization. He is also a member of the board of directors of the Geneva-based International Centre for Trade and Sustainable Development.

“I think it’s a mistake for our country to solely focus on trade deficits in terms of establishing our trade policy,” said the director. “If we grow faster than everybody else in the world, then we are going to have a trade deficit.”

“The president himself, I should note, is not an economist,” Bacchus added.

While the US side wants to tackle the automobile sector first in the talks for renegotiation, according to Bacchus, the US should take into consideration the large number of Korean automobiles that are manufactured in the United States with companies that employ American workers.

“Most of the cause of the trade deficit in automobiles is not related to KORUS, or any shortfalls in KORUS,” said Bacchus. “It relates to a combination of slow growth in Korea and a faster growth in the United States.”

“The Trump administration also does not seem to understand that many so-called ‘Korean’ automobiles are not made in Korea, they’re made in the United States,” Bacchus continued. “There are tens of thousands of people employed in the United States by Hyundai and Kia. I think more attention needs to be given in that area during these negotiations.”

“The approach the United States is taking, a sort of view of, ‘my way or the highway,’ is not a view that is going to work,” he added.