Though his official message mostly pivoted on North Korea and its nuclear-ambitious leader Kim Jong-un, the billionaire entrepreneur-turned-president took a utilitarian approach toward money issues by highlighting American jobs, sales of US weapons and the bilateral free trade deal.

Using the second and last day here to zero in on the North Korean issue, Trump kept the economic agenda to his first day.

“We have a terrific meeting scheduled on trade in a little while with President Moon (Jae-in) and his representatives,” Trump said during his visit to troops at Camp Humphreys in Pyeongtaek, Gyeonggi Province, the first stop on his quick visit here.

“And we will start working out so that we create lots of jobs in the United States, which is one of the reasons, one of the very important reasons I’m here.”

The issue of “American jobs,” an unusual choice of topic during a state visit to a foreign country, was brought up once again after the two state chiefs’ summit at Seoul’s presidential office Cheong Wa Dae.

“We have the greatest military equipment in the world and South Korea will be ordering billions of dollars of that equipment, which for them makes a lot of sense and for us means jobs and reducing our trade deficit with South Korea,” Trump said, adding that some of the orders had already been approved. 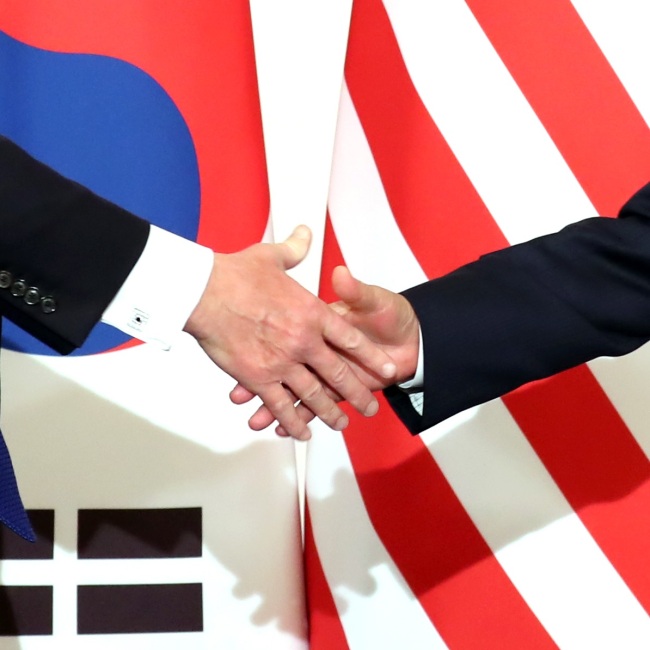 By underlining the purportedly multibillion-dollar deal, the US president was seen as exerting pressure upon his counterpart who displayed a more cautious tone upon the weapons purchase.

“(We) agreed to immediately start consultations for South Korea’s acquisition and development of state-of-the-art surveillance assets,” was Moon’s remark.

The disputed Korea-US Free Trade Agreement, which Trump once condemned as a “horrible deal” and even gestured at withdrawing from, accounted for a relatively small portion of his official comments, naturally, considering Seoul and Washington have already commenced discussions for a potential amendment.

He nevertheless reiterated his intention to have the trade deal revised to the advantage of US industries over a number of occasions.

“(Korea’s purchase of US weapons) will substantially increase (in amount) and therefore bring the trade deficit down, which is very important to our people,” Trump said.

Unlike in the earlier stages of his presidency, however, Trump refrained from drastic expressions such as “disaster” or “termination” of the deal.

Despite speculation that he may elaborate further on the US stance concerning the trade deal, Trump‘s speech at the National Assembly on Wednesday focused on warning North Korea against further provocations, a topic of South Korea’s utmost priority, with no explicit mention of the FTA.