[ The Korea Herald – Send E-mail ]
[Herald Interview] Looking beyond national interests with Turkey
“We don’t have much larger stakes in these issues like the superpowers US or China, therefore it’s easier to raise our concerns and search for solutions together. It’s more like supporting a good friend.”
By Joel Lee
Published : Oct 31, 2017 - 19:48
Updated : Nov 10, 2017 - 17:53
Turkish Ambassador Arslan Hakan Okcal was a third grader in elementary school in Mainz, West Germany, when his father suddenly passed away in 1963. Left with his bereaved mother and two younger brothers, Okcal would not forget the help his family received from a Turkish consul during their arduous time away from home.

“My mother used to say, ‘You should become a patriotic diplomat like the consul,’” the envoy told The Korea Herald last week at the recently reopened Turkish Embassy in Seoul. “That motivated me to become a diplomat. Over the next 40 years, with a career spanning Europe, Africa and Asia, I would not have a single idle day.”

Wrapping up four years of his last ambassadorship in Korea, Okcal said he wished to go into teaching and public service after retirement. The 63-year-old diplomat plans to return home this year and retire in a year.

“The Turkish-Korea relations are moving brightly forward,” he said. “We are rising middle powers with increasing influence in regional and global arenas, and cooperate closely bilaterally and through the United Nations, G-20 and MIKTA, among others.” 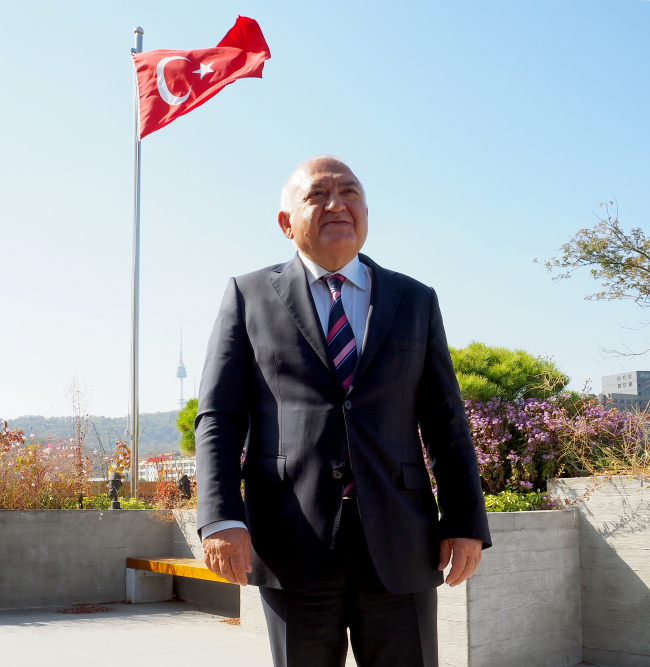 Turkish Ambassador Arslan Hakan Okcal poses at the recently reopened Turkish Embassy in Seoul. (Joel Lee/The Korea Herald)
The embassy, which was previously in Yongsan-gu, relocated to Jangchoong-dong, Jung-gu last month, on the 60th anniversary of diplomatic relations between Turkey and Korea. The diplomatic mission now has a niftily repurposed five-story building overlooking Namsan and downtown Seoul, 60 years after the two nations opened their embassies in Ankara and Seoul on Sept. 30, 1957.

“Last year was a difficult year due to terrorist attacks and the failed coup attempt, but this year opened a new chapter in our relations. Turkey is embracing law and order again, and a sense of normalcy has returned,” according to the envoy.

Recent major collaborative infrastructure projects include the Eurasian Tunnel, bridging Europe and Asia beneath the Bosporus, which was built by a Turkish-Korean consortium and opened on Dec. 20. Another Turkish-Korean partnership is constructing the 1915 Canakkale Bridge, which will be the world’s longest suspension bridge when it is completed in 2023, coinciding with the 100th anniversary of the Turkish republic.

Hyundai, Samsung and LG have made large investments in Turkey, and the two governments are spurring investments by small and medium-sized enterprises, according to Turkey’s Foreign Economic Relations Board. Okcal pointed to recent large investments in entertainment and renewable energy in Turkey, including CJ-CGV’s $800 million acquisition of Turkey’s Mars Cinema Group in April last year; and a joint venture between Korea’s Hanwha Q Cells and Turkey’s Kalyon Energy for 1-gigawatt solar panel manufacturing plants in Karapinar, Konya Province, as well as capital Ankara. 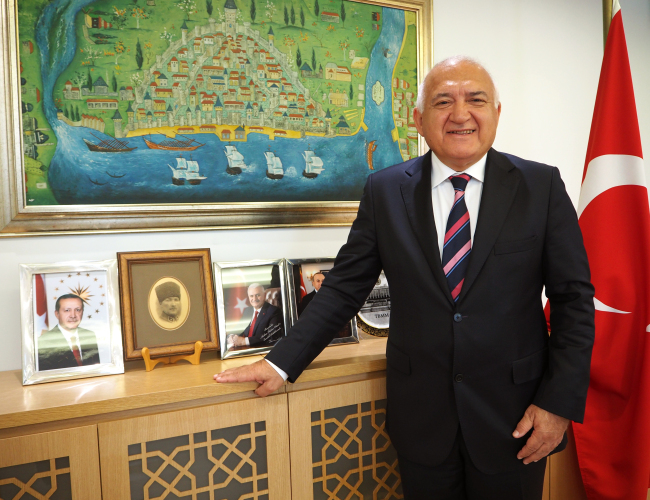 Some 3,000 Turkish veterans are still alive and a select number of them come to Korea on a rotational basis annually through the Ministry of Patriots and Veterans Affairs. The soldiers established the Ankara School and Orphanage in 1952 in Suwon, a sanctuary for orphans taken into custody by Turkish troops from ravaged battlefields. After their numbers swelled to over 100, the orphans were housed at the newly instituted Ankara school, with over 800 graduates between 1952 and 1967, when the school closed. The embassy and the city government of Suwon, Gyeonggi Province, inaugurated a new park in memory of the orphanage in 2013.

Two-way trade turnover has hovered at $7 billion-$8 billion over the last two years, and cumulative bilateral investment topped $2 billion last year. Some 320 Korean firms operate in the Turkish market of $906 billion, while over 80 Turkish companies have launched businesses in Asia’s fourth-largest economy of $1.5 trillion.

The two countries’ free trade agreement entered into force on May 1, 2013. Under Okcal’s tenure, Turkey and Korea also held numerous meetings and consultations through G-20 and MIKTA, an informal alliance of middle powers Mexico, Indonesia, Korea, Turkey and Australia, led by their Foreign Ministers and dedicated to enhancing global governance.

“MIKTA doesn’t focus on specific or concrete issues, but raises larger issues of regional and global significance based on each country’s own set of concerns,” noted the diplomat. As examples, he explained that Korea is largely concerned with nuclear nonproliferation and countering the threat of North Korea’s nuclear and missile provocations, while Turkey has concentrated its efforts on containing crises in the Middle East and resultant instabilities from refugee migration and terrorist attacks. 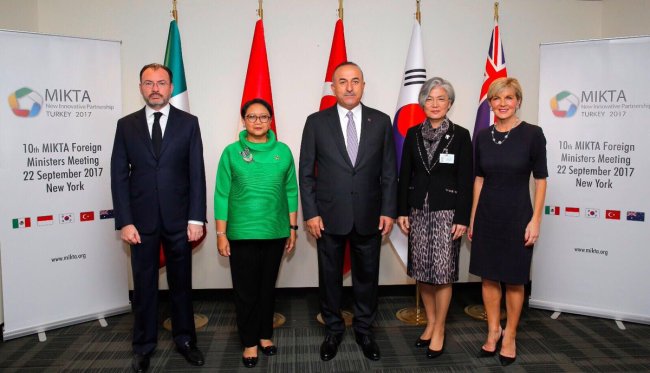 The 10th MIKTA Foreign Ministers' Meeting in New York on Sept. 22, 2017 (MIKTA Australia)
“We don’t have much larger stakes in these issues like the superpowers US or China, therefore it’s easier to raise our concerns and search for solutions together. It’s more like supporting a good friend,” he said.

Okcal also stressed the need to reform the United Nations system, a leviathan often criticized for its willful ignorance of the world’s most critical problems. Analysts point to the Security Council’s structure -- comprised of permanent members and nuclear power states of the United States, Russia, China, United Kingdom and France -- as the source of diplomatic gridlocks. “Because of the way the UNSC works, the other 188 countries have less say in international affairs compared to these five permanent members,” Okcal said.

However, citing broader problems engulfing the Middle East, Europe, Asia and beyond -- related to matters of security, mass migration and global warming -- he also said the international community cannot do without the UN. “MIKTA countries can raise awareness for reforming the UN for more equitable governance and effective decision-making.”

Regarding the future of international cooperation, the envoy said he remained hopeful, noting that younger generations of diplomats, intellectuals and citizens progressively engage and communicate with each other.

“There is cause for optimism. They are better educated, well-traveled and technologically savvy. When I started my diplomatic service during the Cold War, we didn’t know anything about the other side, nor what was going on the other side of the ideological sphere. Hierarchy was also very stiff.” 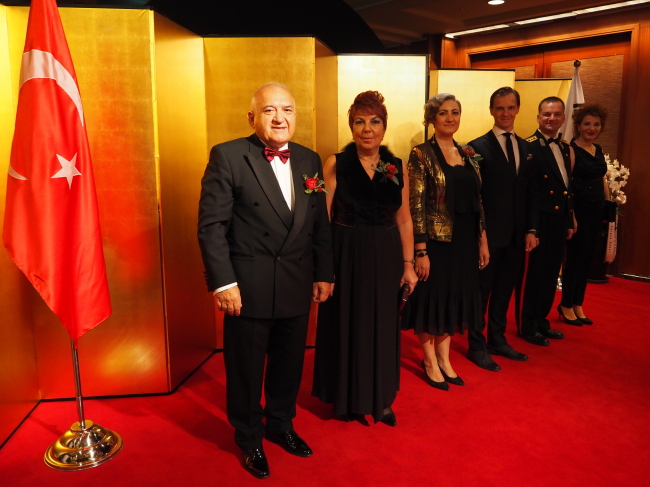 Turkish Ambassador Arslan Hakan Okcal (left) poses with his spouse Mrs. Pinar Okcal (second from left), diplomats and defense attaches of the Turkish Embassy at a reception marking the 60th anniversary of diplomatic relations between Turkey and Korea at Lottel Hotel on Monday. (Joel Lee/The Korea Herald)
On the question of the Middle East’s future, he said the region, where terrorist group Daesh has left abominable deaths and destruction in its wake, has much potential for rebirth.

“The long-term solution to the Middle East has to be sustainable development,” the diplomat asserted. “The destroyed cities of Syria and Iraq, such as Aleppo, Raqqa, Tal Afar and Mosul, need to be rebuilt. Turkish and Korean companies can join hands to reconstruct these former ‘jewels’ of ancient civilizations. But the funding has to come from affluent countries and institutions with stakes in the region.”

Okcal also touched on recent instabilities arising out of Iraqi Kurdistan’s desire to break free as a new nation-state.

“Breaking up is not a solution,” he said. Such “unilateral declaration of independence cannot bring desirable outcomes for anybody.”

Analysts say the dream of an independent Kurdistan remains distant and unlikely, as all regional countries Iraq, Iran, Syria and Turkey, where Kurds live as minorities, fear the secession could trigger separatist movements within their own borders.

“The Middle East has been embroiled in wars and conflicts over last several decades, so let’s not start another crisis,” the ambassador advised. “What we need is more stability, cooperation and dialogue.”