A total of 195,355 planes flew into and out of South Korea in the July-September period, up 1.2 percent from a year earlier, the Ministry of Land, Infrastructure and Transportation said.

Air traffic was the busiest on Sept. 30, the first day of the long Chuseok holiday when local airports served 2,259 flights. 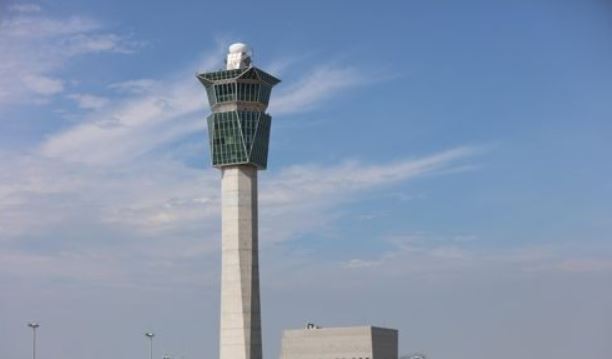 This photo, provided by Incheon International Airport on Aug. 28, 2017, shows a control tower in South Korea`s main gateway west of Seoul. (Yonhap)
The number of international flights rose 2.1 percent on-year to about 120,000 in the period, while domestic routes remained at around 63,000.

Traffic in Incheon International Airport, the nation's main gateway west of Seoul, went up 4.7 percent to 94,776 flights, as more Koreans headed to overseas destinations during the summer vacation and autumn holiday season.

Flights to and from Jeju International Airport fell 5.3 percent to 44,000 due to a sharp decline in Chinese travelers to the southern resort island amid diplomatic rows following Seoul's deployment of a US Terminal High Altitude Area Defense system.

"Air traffic in Jeju and Gimpo shrank as China routes have decreased due to diplomatic row over THAAD deployment," the ministry said. "In contrast, traffic in Incheon airport rose on expanded air routes to Southeast Asian nations."

The ministry expected air traffic to rise in the fourth quarter on increased routes to Southeast Asia and strong demand for outbound travel in the winter season. (Yonhap)