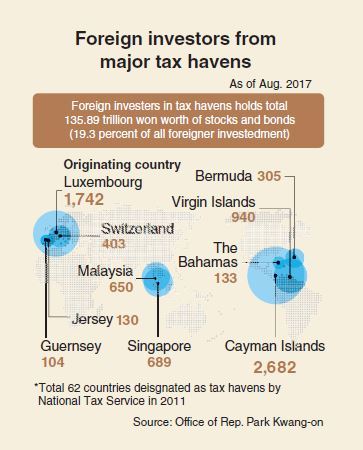 Out of some 700 trillion won ($622 billion) worth of stocks and bonds held by foreign investors, nearly 20 percent originates from regions deemed as tax havens, raising concerns over the heightening volatility of the local financial market.

According to data released by Rep. Park Kwang-on of the Democratic Party of Korea, registered foreign investors reached 40,141 from 127 countries as of the end of August.

Most investors came from the US, followed by Japan, Cayman Islands, Canada, the UK and Luxembourg.

As it is easier to set up paper companies in tax havens, it is also easier for investors there to engage in tax evasion or stock manipulation, said Rep. Park, calling for tighter monitoring and sharing of information among governments.