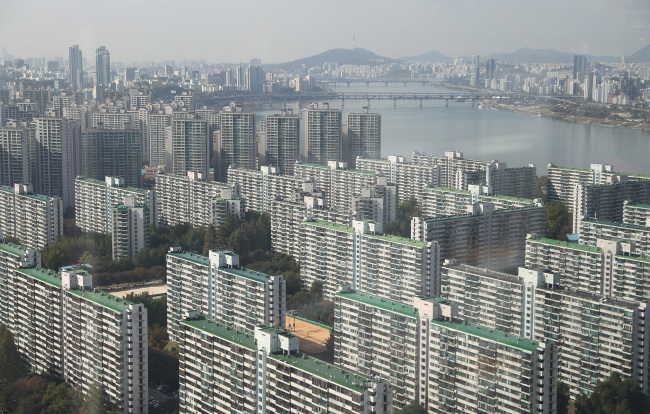 “The Tuesday measure indicated the government’s moves have been and will maintain consistency, defusing the uncertainties,” Kim In, an analyst at Eugene Investment & Securities, wrote in a note Wednesday.

He added that by the time the plan is implemented, South Korea’s monetary expansion is highly likely to have concluded, which would offset banks’ losses from decreased loans.

Analyst Kim Eun-gab of IBK Securities wrote the concerns about possible regulations on banks have disappeared with the Tuesday measures that exclude plans to regulate banks.

“The government announcement had been delayed (for months), touching off concerns on whether the new household debt measure contained regulations on banks,” Kim wrote. “The Tuesday measure, however, was within market expectations and cannot be seen as a strengthened regulation on banks.”

All 10 bank stocks, listed on the top-tier Kospi market, gained Wednesday. The sector as a whole rose 1.76 percent.

On the flip side, builders in Korea, long suffering from lackluster overseas performance and government regulations on real estate market, are also expected to see a turnaround in local business at least until the measures begin to go in effect, wrote Ra Jin-sung, an analyst at Kiwoom Securities.

“Home buyers will take out mortgage loans as much as possible and buy properties through the end of this year, before the new measures are implemented in 2018,” Ra wrote. “The Tuesday announcement signaled waning policy uncertainties and stock price recoveries in the construction sector.” The entire construction sector in Korean markets rose 0.63 percent Wednesday.

Ra, in view of the housing market, played down the possibilities of oversupply in houses and the following burst of the real estate market bubble within this year, while projecting the apartment price this year to be a “soft-landing, rather than slumping.” Ra, however, added there are clues that the volume of home transaction next year might fall off a cliff.

The remarks came after the government on Tuesday unveiled plans to toughen loan limits to multiple home owners, in a bid to curb speculative real estate investment to decelerate the pace of household debt growth.

Starting January next year, lenders of mortgage loans in Seoul and metropolitan areas will be obliged to include both principal and interest of existing and new mortgage loans when gauging the credit availability. Through the measure, maximum loans to multiple home owners will be reportedly cut roughly by half.

The new debt-to-income ratio is a step forward from the August measure. Lenders were not required to include the principal of existing mortgage loans in conventional debt-to-income ratio, which in August was capped at 40 percent, 10 percentage points tighter.

Mortgage lenders in Korea measure the maximum volume of household loans based on the loan-to-value ratio and the debt-to-income ratio. After measuring both, financial institutions choose the smaller of the two to base extended loans on.

The government also announced plans to have banks adopt the debt servicing ratio in the second half of 2018 to assess the lenders’ ability to control debts.

Through the fresh set of measures, following previous measures on Aug. 2, the government expects the national household debt to grow by about 8 percent a year. The volume of household debt jumped 10.9 percent in 2015 and 11.6 percent in 2016, in part due to low key rate, while between 2005 and 2014 the debt rose by 8.2 percent yearly on average.