Ji soared 30 spots to reach No. 42 in the rankings on the strength of her victory at the Swinging Skirts LPGA Taiwan Championship in Taipei on Sunday. It was her first LPGA win in eight years.

There were no changes at the top, with South Koreans Ryu So-yeon and Park Sung-hyun staying at No. 1 and No. 2, respectively. 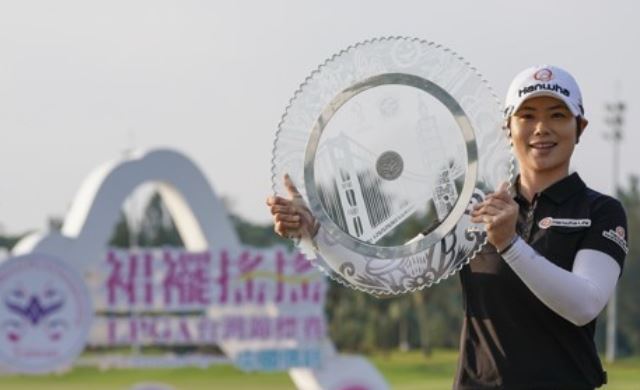 In this EPA photo taken Oct. 22, 2017, Ji Eun-hee of South Korea holds up the champion`s trophy after winning the Swinging Skirts LPGA Taiwan Championship in Taipei. (Yonhap)
At No. 4, Chun In-gee was the next highest-ranked South Korean. Kim In-kyung moved up a notch to No. 7, while Park In-bee, who has actually ruled herself out of the remainder of the LPGA season with a back injury, slipped back into the top 10 at No. 10.

Ji's victory was the 15th by a South Korean player this year, tying the record for most by the country in one LPGA season. There are four events left in 2017. (Yonhap)