South Korea's bourse operator is set to decide this week on whether to allow the resumption of trading of Daewoo Shipbuilding & Marine Engineering Co. on the local stock market, industry sources said Sunday.

The trading of Daewoo Shipbuilding stocks have been halted since July last year, due to its impaired capital base, and the shipyard was given a one-year rehabilitation period to improve its financial status for the resumption of stock trading.

According to the sources, the Korea Exchange will hold a meeting later this week on whether to resume Daewoo Shipbuilding trading or not. 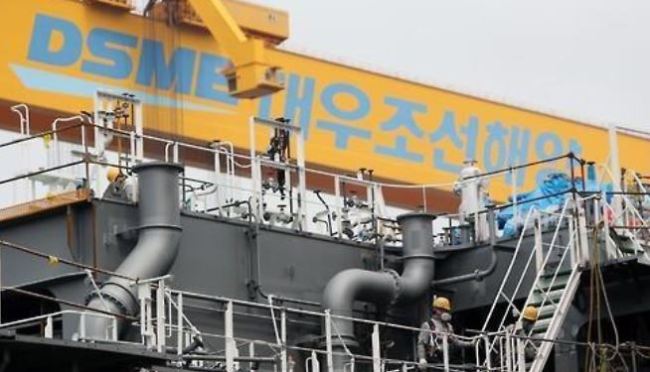 (Yonhap)
If approved by the bourse operator for the trading resumption, Daewoo Shipbuilding will restart its trading before the end of the month.

"Daewoo Shipbuilding's financial status improved, and the debt ratio also fell sharply, which means the KRX may give the nod to its stock trading," said Han Young-soo, an analyst at Samsung Securities.

Daewoo Shipbuilding posted a profit for the second straight quarter in the second quarter, largely thanks to cost-cutting measures and increased delivery of offshore facilities.

In the first half of the year, Daewoo Shipbuilding racked up a net profit of 1.49 trillion won ($1.32 billion) and an operating income of 888 billion won.

The shipyard is also expected to remain in the black in the third quarter.

In March, its creditors, led by Korea Development Bank, announced a fresh rescue package worth 6.7 trillion won for the shipyard. (Yonhap)