[ The Korea Herald – Send E-mail ]
Korea ranks 11th worldwide in market cap
By Yonhap
Published : Oct 22, 2017 - 10:29
Updated : Oct 22, 2017 - 10:29
The combined market capitalization of South Korean firms listed on the main and secondary bourse ranks 11th among global peers, claiming 1.77 percent of the total, on the back of a rise in market heavyweights, such as Samsung Electronics, data showed Sunday.

The combined market cap of the world's stock markets reached a record high of $88.59 trillion as of Thursday, increasing 35 percent from a year ago, as optimism over a global economic recovery fueled a rally in advanced and emerging stock markets, according to the data compiled by Bloomberg. 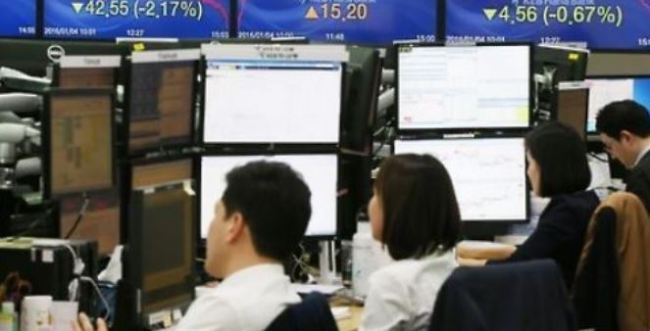 (Yonhap)
The US stock markets have continued to renew their all-time highs this year, with peers in Germany and India also hitting record highs last week.

The market capitalization of South Korea's stock market reached $1.57 trillion, accounting for some 1.77 percent of the total market cap around the globe.

Its market cap has surged 25.1 percent so far this year, the fifth-largest gain after France's 33.9 percent rise, Germany's 29.2 percent gain, Hong Kong's 26.8 percent advance and India's 26.1 percent jump, according to the data.