[ The Korea Herald – Send E-mail ]
[News Focus] Why are investors shunning small-caps on Kospi?
By Son Ji-hyoung
Published : Oct 19, 2017 - 17:53
Updated : Oct 19, 2017 - 18:11
Record market rallies in South Korea, mainly spurred by large-cap stocks such as Samsung Electronics on their upbeat earnings forecast, have highlighted that investors are less drawn to small cap stocks -- relatively more exposed to potential risks -- even in their attempt to unwind from overweight tech sectors here. 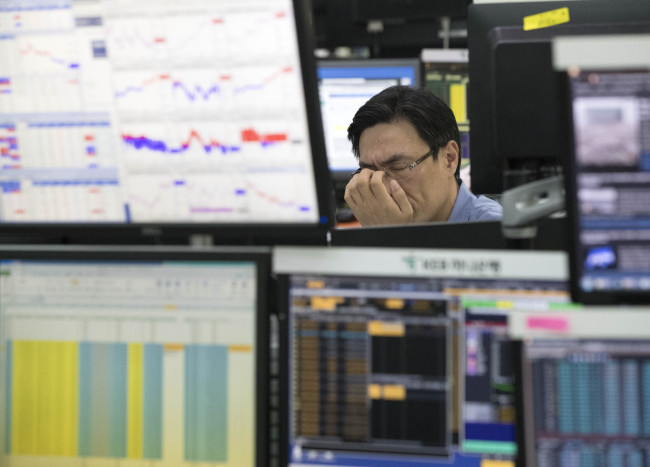 (Yonhap)
The main bourse index Kospi rose 3.4 percent for the past seven trading days until Wednesday, while scaling the record earlier this week, according to data by the Korea Exchange. The market resumed operation on Oct. 10 after the 10-day holiday break.

The yield of large-cap shares and small-cap shares in Kospi, however, came in contrast. The Kospi‘s LargeCap index rose 3.7 percent over the cited period, while its SmallCap index fell 0.1 percent. The second-tier bourse index Kosdaq rose 2.4 percent.

Offshore investors have net purchased stocks worth 1.62 trillion won ($1.43 billion) over the cited period, showed another set of data by the Korea Exchange.

About one-third of the net purchase, worth 524.8 billion won, went to market bellwether Samsung Electronics, which accounts for over 20 percent of the main bourse’s market cap. Over the cited period, Samsung Electronics soared 6.8 percent.

Large cap stocks, mostly in the tech sector in Korea, still “dominantly appeal to foreign investors,” coupled with the sector‘s global growth momentum on the back of strong fundamental, analysts said.

Hwang Min-sung, an analyst at Samsung Securities, wrote that investors’ attempts since mid-2017 to scale down the investment in the tech sector, which he called “tech unwinding,” have ended in failure, mainly due to other sectors’ exposure to risks.

“While tech sectors showed salient profit growth and a rosy outlook until next year, other sectors are exposed to geopolitical risks such as trade deal conflict and issues regarding the government’s regulations,” he wrote in a note.

The record-high volume of Kosdaq-listed firms‘ outstanding balance, which stood at 4.6 trillion won as of Sept. 22, is “exposing the small-cap stocks to the threats when they undergo slumps in stock markets,” he wrote on Thursday. The outstanding credit amounted to over 2 percent of the entire market cap.

Ko added the small caps have had little room for stock price growth in the middle of large cap boom.

“For small and mid-sized caps to outperform large caps, the large firms must see either drops in revenue or their confidence in earnings forecast undermined,” Ko wrote, while adding the robust fundamentals in export-driven large-cap firms leave little possibility of that happening.

Moreover, an oil price rise usually precedes the increase in volume of exports by a month, according to Gwak Hyun-soo, an analyst at Shinhan Financial Investment. From Sept. 1 through Thursday, Brent crude and West Texas Intermediate both jumped slightly over 10 percent.

Kospi on Thursday ended 0.4 percent lower than on Wednesday. The index turned weak at around noon, an hour after China released its third-quarter growth by 6.8 percent, down 0.1 percentage point from a quarter prior. This came in spite of the Bank of Korea’s uplift of growth forecast this year to 3 percent and inflation rate to 2 percent, both up 0.2 percentage point, as well as new highs in Wall Street.