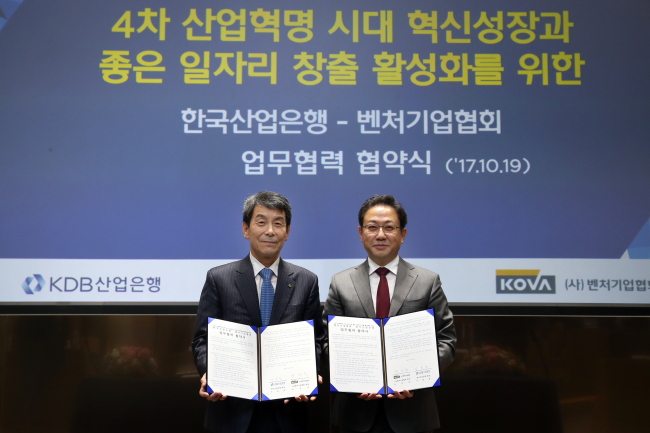 Korea Development Bank Chairman Lee Dong-gull (left) attends a signing ceremony in Seoul on Thursday with Korea Venture Business Association to work together in supporting venture companies. (KDB)
KDB will finance venture firms recommended by the association, according to the plan.

In addition, the nation’s largest state-run bank will seek ways to stimulate the emergence of local unicorns, or startups valued at over $1 billion, and ramp up investor relations programs for local startups.

KDB called the partnership an acceleration of the government’s “fourth industrial revolution” drive in a Thursday release.

This marks a step forward from KDB’s operation of “KDB Next Round,” an investor relations program normally held twice a week.

Through KDB Next Round launched in August 2016, 48 venture firms had received a combined 145.8 billion won ($128.8 million) worth of investments through September, according to KDB. Nearly one-fifth of the investments came from the state-run bank, it added.