[ The Korea Herald – Send E-mail ]
Gyeonggi Province rebrands English Village to Change Up Campus
By Bak Se-hwan
Published : Oct 17, 2017 - 16:05
Updated : Oct 18, 2017 - 13:39
Gyeonggi English Village, which was South Korea’s first residential English camp, has rebranded itself as Change Up Campus as part of efforts to nurture and promote high-quality and future-oriented education for students, according to the province Tuesday.

The Change Up Campus run by Gyeonggi Province will provide programs designed to help students to better prepare for the coming “fourth industrial revolution” on top of learning the English language, the province said. 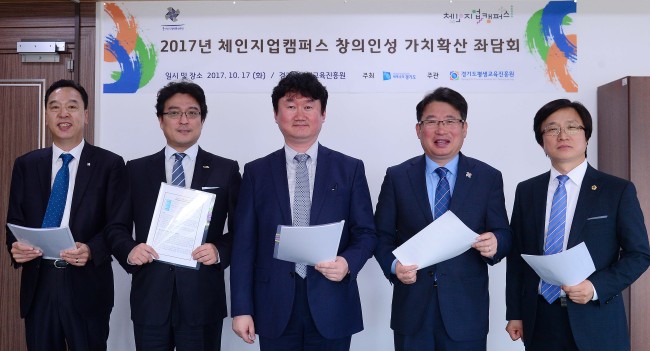 Professor Shin Kwan-soo of Namseoul University, who obtained a Ph.D. in international education from the University of Southern California, said programs should be based on “creativity, collaboration, communication and critical thinking” in line with global educational standards.

Creativity in education has often been associated with arts education, he went on, but it could be expanded to teaching students how to think creatively in various fields, he said. 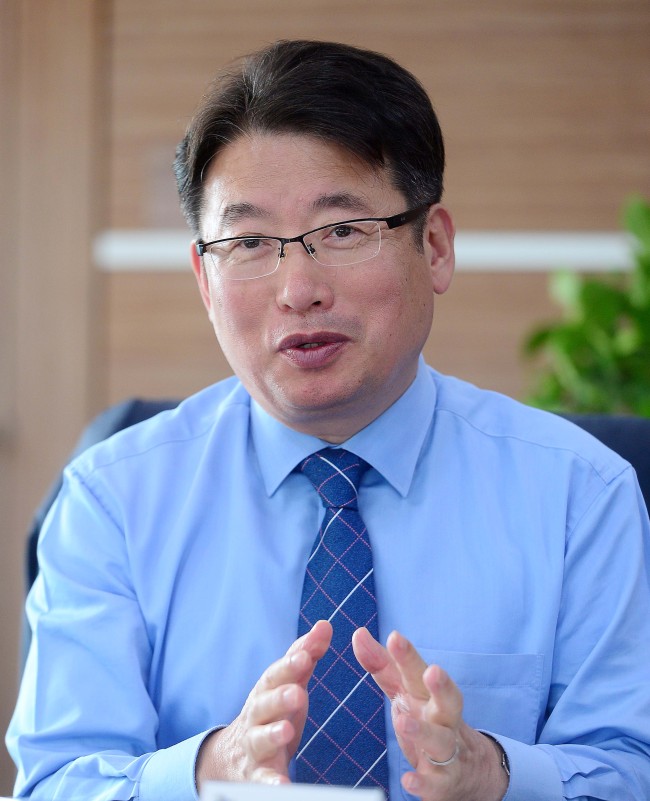 Kim Gyeong-pyo, president of Gyeonggi Provincial Institute for Lifelong Learning (Lee Sang-sub/The Korea Herald)
“A great many business leaders think they were not born more creative than others, but were educated to be so,” he said, citing a study published in Harvard Business Review.

Another participant, Chang Jae-young, president of Royal Academy of Music Korea, cited the UK’s art education where students must master at least one musical instrument until high school, as a successful model of teaching that needs to be adopted at the Change Up Campus.

“The UK and other developed countries in Europe emphasize the importance of art education since preschool,” Chang said.

“Here, we do have an art class in public schools, but it is rather treated separately among other subjects. But in the UK, arts instruction is integrated into math, science, foreign language and other subjects, allowing students to learn it in the context of everyday life,” Chang said.

“By doing so, creativity can thrive,” Chang added.

With the launch of the new educational hub, the province should work in partnership with local communities and educational experts for the development of its programs, said Gyeonggi Province councilor Bae Soo-moon.

The councilor said that the campus could provide classes run by apprentice teachers from the region’s education colleges through partnership.

“It’s a win-win for everyone. With the partnership, the province can resolve the possible problem of insufficient supply of native English-speaking teachers, while apprentice teachers can effectively develop their teaching skills,” Bae said.

Seoul National University of Education professor Hong Sun-ho, however, emphasized that the province should learn from its own experiences of running the English village business and prepare for more high-quality education options.

“We need to think about what to learn from the previous business model and what to work on to improve it. We need not only high-quality educational programs for students, but for teachers as well to run the programs more smoothly,” Hong said.

“Having good software is as important as having good hardware as part of the overall package,” Hong added.

At an opening ceremony held two days earlier in Paju, Gyeonggi Province Gov. Nam Kyung-pil said that the remodeled campus “carries the values of evolution and revolution” to provide a better learning opportunity to the next generations, and that it would “provide a model for the country’s new education.”

The new campus provides classes for students including experimenting with drones, robotics, coding and 3-D printing, as well as language courses and mentoring, as part of a solution to help them learn arts, science and technology out of public schools, according to the province.