The seminar invited keynote speaker Aaron Szabo, senior adviser for International Regulatory Cooperation of the Office of Information and Regulatory Affairs in Washington, who shared the US’ approach for establishing analytic tools for regulatory design and review.

“The idea behind good regulatory practices is to establish how countries should establish their rules and regulations,” said Szabo, during an interview with The Korea Herald on Thursday at the US Embassy Seoul. 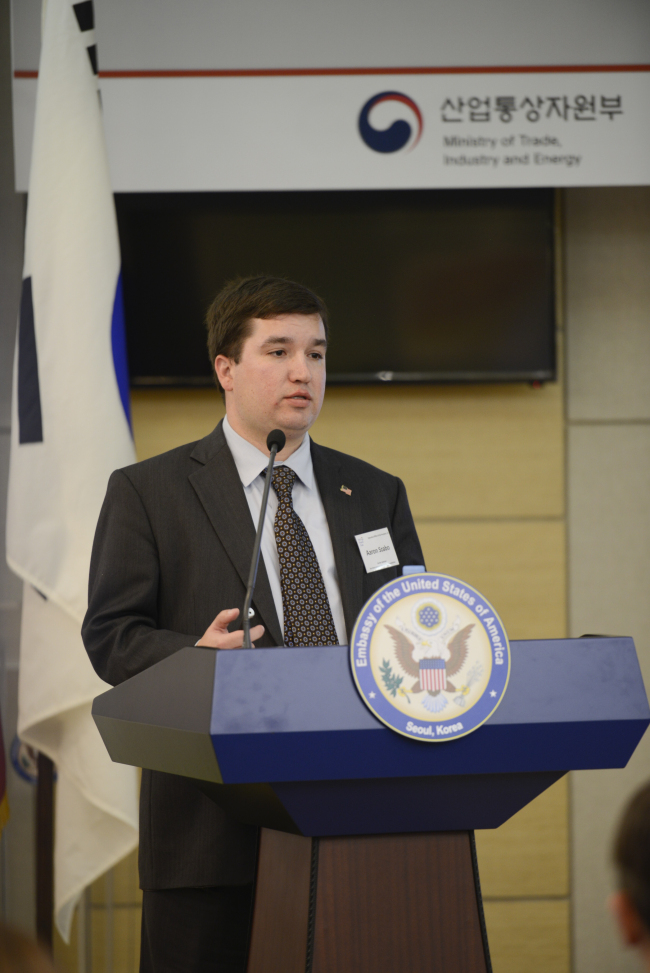 Aaron Szabo, senior adviser for International Regulatory Cooperation of the Office of Information and Regulatory Affairs in Washington, speaks during a joint Fair Player Club-US Embassy Seoul seminar at the American Center Korea in Seoul on Thursday. (Fair Player Club)
“This includes things such as centralized review, which is done in the United States through the Office of Information Regulatory Affairs ... that we are transparent, that would be both before the development of any rule, after proposing a rule, and then finalization,” he added.

The number of primary laws initiated by the National Assembly, Korea’s unicameral parliament, increased from 38.5 percent in 2000 to 86 percent in 2016, said the report titled “Regulatory Policy in Korea: Towards Better Regulation” released by the Organization of Economic Cooperation and Development earlier this year.

The report stated that most of these bills “lack regulatory quality of scrutiny or review.”

According to Szabo, Korea’s practice of establishing primary laws through the National Assembly is a cause for concern.

“I would note that one of the bigger concerns is ... approximately 80 percent of the regulation actions are done through the National Assembly, which goes around that RRC (Regulatory Reform Committee) process,” Szabo said, emphasizing the importance of an open and transparent multi-review system such as the US’ OIRA, despite the process meaning certain regulations could take years to fully enact.

While the OECD maintains that regulatory reform has been a top priority in Korea for several successive administrations, the organization stated that maintaining momentum for reform in Korea will be essential for producing tangible results and supporting inclusive growth, productivity and innovation.

According to the report, the 2015 OECD Indictors of Regulatory Policy and Governance show that Korea has performed slightly above the OECD average on its regulatory impact assessment. However, the report said there is still room for improvement including on the “quality of these practices and by extending these practices to the entire regulatory system.” The review also stressed the need for Korea to establish a clear strategy for regulatory policy in order to make better use of its deployed resources.

“I just want to emphasize the importance of good regulatory practices,” says Szabo. “While it means that the process might be slower, this initial outreach and work saves a lot of time in the back-end. I would say that is one of the successes in the US system.”