Finance Minister Kim Dong-yeon is set to deliver the message later this week when he meets with his counterparts and central bankers from the Group of 20 leading economies.

Geopolitical tensions have heightened on the Korean Peninsula in recent months as North Korea has fired intercontinental ballistic missiles and carried out its sixth and most powerful nuclear test.

North Korean leader Kim Jong-un has vowed to take the "highest-level" action in response to US President Donald Trump's threat to "totally destroy" the North over its nuclear and missile programs.

Kim -- who is set to depart Wednesday -- is scheduled to attend the annual meeting of the International Monetary Fund and the World Bank on Friday and Saturday. 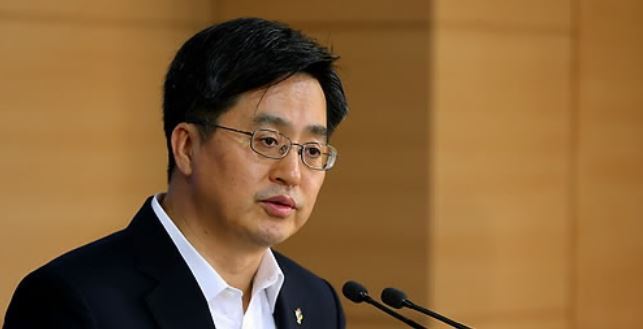 Finance Minister Kim Dong-yeon (Yonhap)
Bank of Korea Governor Lee Ju-yeol is also set to attend the meeting of G-20 finance ministers and central bank governors, as well as the annual meeting of the IMF and the World Bank.

Kim also plans to hold a separate meeting with US Treasury Secretary Steven Mnuchin to discuss ways to boost bilateral financial and economic cooperation and coordinate an economic policy on North Korea.

The US has further tightened the screws on North Korea in its attempts to pressure Pyongyang into abandoning its nuclear and missile programs.

Despite international sanctions, North Korea has vowed not to give up its nuclear program, viewing it as a deterrent against what it claims is Washington's hostile policy towards it.

The policymaker met with senior officials of Standard & Poor's at the S&P headquarters in New York in September when he accompanied President Moon Jae-in on his visit to the UN General Assembly.

In August, S&P reaffirmed its long-term sovereign rating on South Korea at "AA" and maintained its outlook at "stable." (Yonhap)