One in three South Koreans have borrowed money to buy houses, and they took a greater amount of loans than other debtors, becoming one of the main reasons behind the ballooning household debt in Asia's fourth-largest economy, a report showed Monday.

A total of 18.57 million South Koreans, 36 percent of the total population, borrowed 1,439 trillion won ($1.2 trillion) from local lenders as of June, with each holding 77.47 million won of debt on average, according to the office of Rep. Chung Sye-kyun's, which analyzed credit data from NICE Holdings.

A third of the debtors, or 6.22 million people, took out a combined 938 trillion won of loans in the form of a mortgages, Chung's office said. 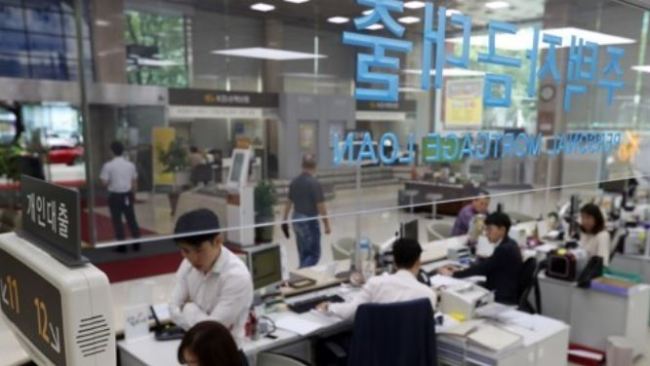 Customers ask about their debt plans at a Seoul bank on Aug. 21, 2017. (Yonhap)
Each mortgage borrower had 150.74 million won in debt on average, which is about four times the total for of non-mortgage borrowers.

The debt burden was much higher for multiple homeowners although their income level was not much greater than those with just one house, posing a higher risk in terms of their debt service capability, it noted.

"The government needs to strengthen loan regulations on multiple home owners, while also taking cautious measures so as not to make them default or experience difficulties paying back debt due to lack of liquidity," the National Assembly Speaker said.

The government is set to announce a fresh set of household debt measures this month, which would tighten loan regulations on those with several houses to curb highly leveraged investment in the real estate market.