During the Korean War, the US Air Force and Navy carried out a massive bombing campaign against Pyongyang that lasted for almost three years. By the end of the war, when an armistice was signed in 1953, the city was virtually flattened, with about 75 percent of it destroyed.

Since then, the communist country has made efforts to build one of the world’s densest air defense networks. A multilayered air defense structure has been constructed around Pyongyang, the North’s coastal corridors and its cross-border regions.

But the North’s air defense capability was recently thrown into question when its radar appeared to fail to detect US supersonic B-1B bombers that flew across the Northern Limit Line in the East Sea – the de facto sea border – further north than any US aircraft has flown off the North’s coast this century.

“To put it simply, there were no reactions at all from North Korea when the B-1B bombers entered the area,” said Rep. Lee Chul-woo of the main opposition Liberty Party of Korea, who was briefed on the matter by Seoul’s National Intelligence Service on Tuesday.

“It seems that North Korea wasn’t able to take any measures because it didn’t anticipate the flyover, which took place around midnight, and its radar failed to capture a strong signal.” 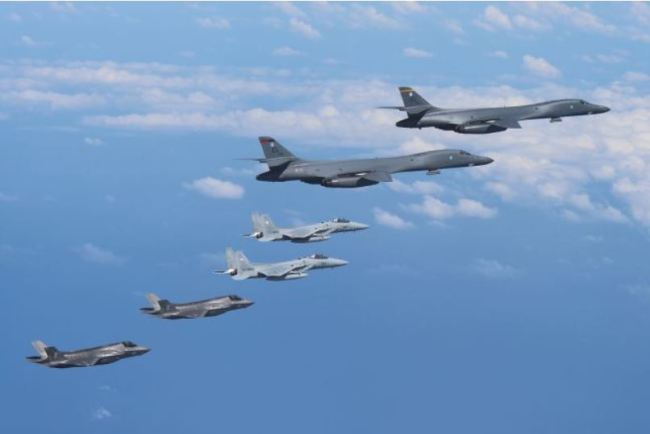 US Air Force and Marine Corps aircraft conduct a mission with the South Korean Air Force over the Korean Peninsula last week. US bombers accompanied by fighter jets flew off the east coast of North Korea on Saturday in a show of force designed to project American military power in the face of Pyongyang‘s weapons programs, the Pentagon said (AFP-Yonhap)
Theoretically, North Korea’s early-warning radar is capable of detecting incoming aircraft approaching its territory. With a range of up to 600 kilometers, the P-14 Tall King radar should be able to detect aircraft moving between Jeju Island and the Japanese main island of Kyushu.

The two B-1B lancers -- escorted by F-15 C fighters -- reportedly conducted aerial maneuvers about 300 to 350 kilometers away from Wonsan, where the P-14 Tall King radar is deployed alongside SA-5 surface-to-air missile system, meaning the aircraft were well within the radar’s detection range.

Some analysts attributed the failure to Pyongyang’s lack of resources to operate the radar around the clock, while others suggested that the North could have activated the system, but its air defense officials might not have been up to reacting to the surprise maneuver.

“Given the seriousness of the current security situation, I don’t think they have turned off the radar. If this is their first failure, the air control officers’ tardiness should be blamed,” said a former air control officer in the Air Force, who declined to reveal his identity due to the sensitivity of the issue.

Even if the radars were to detect the aircrafts entering the North’s airspace, it is not clear whether the North Korean military could shoot them down, given that North Korea’s air defense system mostly comprises outdated weaponry from the former Soviet Union. 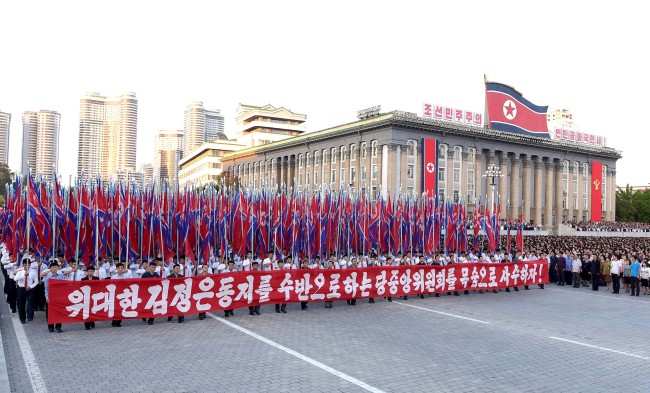 The other way for North Korea to shoot down the US fighter planes would be to scramble its fighter jets, but the chances that its Soviet-era war planes could win in a dogfight with fourth-generation US fighter jets are extremely low, analysts added.

“During the Gulf War and Iraq War, the Iraqi air force was effectively crushed by the US without any significant air battles. The North’s current air force and its air defense capability is much weaker than that of the Iraqis,” Shin Won-sik, former vice chairman of South Korea’s Joint Chiefs of Staff.

According to South Korea’s 2016 Defense Ministry white paper, North Korea has roughly 810 fighter planes, but experts said most of them are outdated Soviet-era aircraft and have been plagued with malfunctions.

Some analysts, however, warned against underestimating the North’s capabilities, saying that although its Soviet-era air defense system and jet fighters are no match for modern aircraft, they could still threaten non-stealth bombers -- such as the B-1B.

In 1969, a North Korea MiG-21 aircraft shot down a US Navy EC-121 aircraft on a reconnaissance mission over international waters, killing 30 sailors and one marine. In 1994, a US helicopter was downed by a portable missile, killing one pilot, after it crossed into the North’s airspace.

“North Korea has very capable air defenses. … North Korea can shoot down anything that’s not in stealth mode,” said Van Jackson, a former strategist at the US Defense Department, who now serves as a lecturer at Victoria University of Wellington in New Zealand.

Some analyst said that the North could increase the chances of interception by using its own surface-to-air missile system, such as KN-06 which was declared operation earlier this year and ready for mass production.

In May, North Korea’s leader Kim Jong-un oversaw the test of KN-06 that was first seen in a military parade in 2010. The KN-06 appeared to be based on Russia’s S-300 system with a range of about 150 kilometers, security experts estimate.

“The KN-06 has phased array radar and tracks via missile guidance system and may be equivalent to the early S-300P versions but with greater range,” Vasily Kashin, a senior fellow at the Center for Comprehensive European and International Studies at Moscow’s Higher School of Economics, told the National Interest.