Thomas, who won the Dell Technologies Championship en route to capturing the overall FedEx Cup title, will compete in the CJ Cup @ Nine Bridges, which will be played from Oct. 19-22 at the Club at Nine Bridges on Jeju Island.

Thomas, 24, had four victories during the 2016-2017 season, including his first major at the PGA Championship in August. 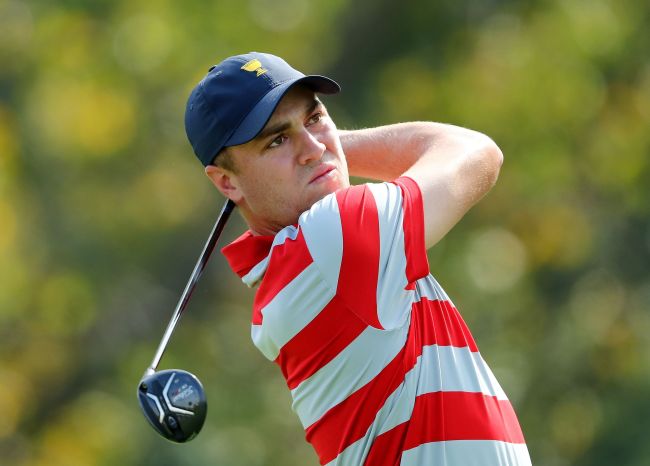 Justin Thomas of the United States tees off during a practice round prior to the Presidents Cup on September 26, 2017 at Liberty National Golf Club in Jersey City, New Jersey. (AFP via Yonhap)
Thomas will be joined by fellow American Xander Schauffele, who won the season-ending Tour Championship last weekend and finished third overall in the FedEx Cup standings.

Earlier this month, Marc Leishman, who captured the BMW Championship during the FedEx Cup playoffs, also confirmed his presence at the CJ Cup.

Leishman is also a member of the International Team at the 2017 Presidents Cup this week. The entire International Team, including South Korean Kim Si-woo and former major champions Adam Scott, Jason Day, Charl Schwartzel and Louis Oosthuizen, will come to Jeju Island next month.

Playing for the host nation will be Choi Kyoung-ju, an eight-time PGA Tour winner, and An Byeong-hun, 2015 European Tour Rookie of the Year. (Yonhap)