North Korean Foreign Minister Ri Yong-ho on Monday accused US President Donald Trump of declaring war on his country, and warned of military response to further show of force maneuvers by the US.

Speaking to the media outside the Millennium Hilton New York One UN Plaza in New York, Ri claimed that recent actions by Trump were declaration of war. 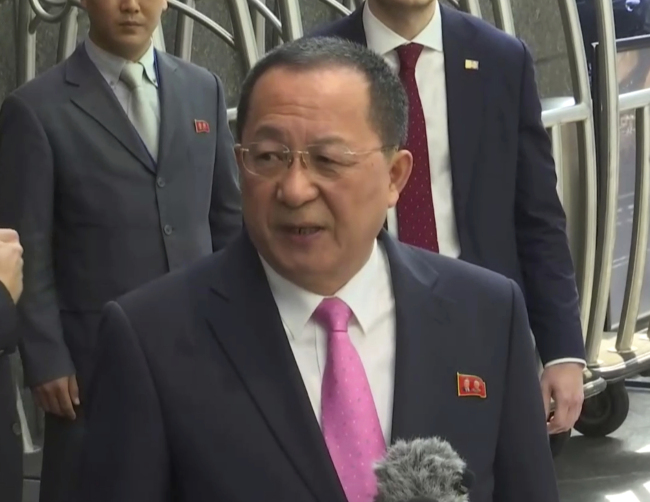 North Korean Foreign Minister Ri Yong-ho accuses the US of declaring war on his country in New York on Tuesday. AP
“This past weekend, Trump again declared war on us, saying that our regime will not last long,” Ri said, saying that the international community had hoped for the war of words between Washington and Pyongyang to escalate into actions.

“These words were uttered by the incumbent president of the US, therefore it is a clear declaration of war. The world must remember clearly that it was the US that first declared war on us.”

North Korea’s latest threat comes three days since the US flew bombers and fighter jets in international airspace close to North Korea in a show of force on Saturday. Although the maneuver did not involve South Korea’s military, South Korea’s presidential office has since stated that concerned authorities in Seoul were closely informed.

On Monday, North Korea also claimed that it had sent open letters to political parties and parliaments of unspecified number of countries to rally their support against the US.

In the letters, issued under the names of North Korea’s parliament and ruling party, North Korea accused the US of pushing the world into a nuclear war.

Pyongyang has been issuing increasingly provocative threats against the US.

In addressing the UN General Assembly on Saturday, Ri lambasted Trump for his earlier UN address in which he warned that North Korea would face destruction if it attacks the US or its allies.

In his address, Ri said that North Korea would take "merciless" actions at any sign of military aggression against the country or its leadership. Ri also told reporters that a hydrogen bomb test in the Pacific could be carried out.