[ The Korea Herald – Send E-mail ]
Korean biz survival rate lower than EU
By Yonhap
Published : Sep 20, 2017 - 11:10
Updated : Sep 20, 2017 - 11:10
South Korean small and medium enterprises have a lower survival rate than their European Union counterparts with some 6 out of 10 surviving more than one year and less than 30 percent past five years, data showed Wednesday.

A total of 62.4 percent of Korean companies remained opened for more than one year as of 2015, and 27.3 percent were doing business beyond five years, according to the data by the Korea International Trade Association. 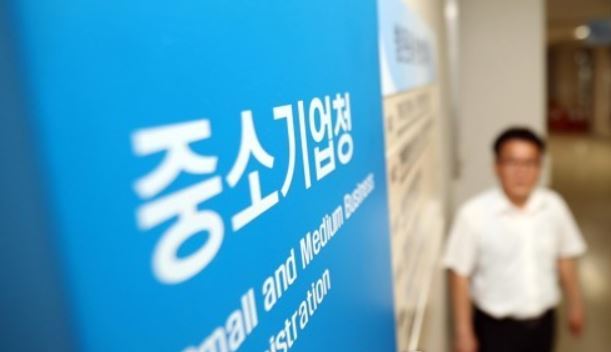 This photo, taken on July 20, 2017, shows the office of the Small and Medium Business Administration located at the government complex in Daejeon, central South Korea. (Yonhap)
More companies started new businesses in Asia's fourth-largest economy than in the cited EU nations, but they failed to survive due to fierce competition with large enterprises and other challenges.

The proportion of startups was 14.6 percent in South Korea, higher than the average rate of the five EU nations at 9.6 percent, it noted.

Eight of 10 new businesses were in the service sector, and the rest of them were in manufacturing and other businesses.

Small companies with fewer than 10 employees accounted for 96.1 percent of them and a mere 1.6 percent exported their products overseas. SMEs in EU nations tended to export more goods.

"The ratio of small companies is much higher than other countries, posing higher risk because they are more fragile to external economic shocks," KITA said. "To secure employment, the government needs to provide support to improve their fundamental structure and competitiveness." (Yonhap)