[ The Korea Herald – Send E-mail ]
Korea inks MOU with AfDB on 2018 annual meeting in Busan
By Yonhap
Published : Sep 19, 2017 - 16:10
Updated : Sep 19, 2017 - 16:10
The South Korean government said Monday that it signed a memorandum of understanding with the African Development Bank on preparations for the institutions’ annual meeting to be held in a city of Busan next year.

The memorandum addresses the sharing of role and cost for the 53rd annual meeting of the AfDB that is expected to draw more than 4,000 finance ministers, governors of central banks, heads of international organizations and business leaders from nearly 80 member states, according to the Ministry of Strategy and Finance. 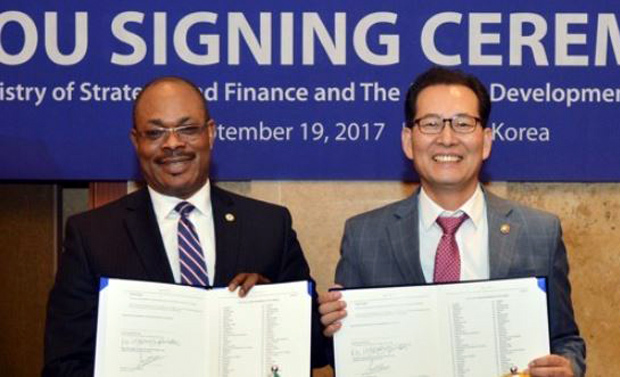 South Korea`s Vice Finance Minister Ko Hyoung-kwon (R) and African Development Bank Secretary General Vincent Nmehielle pose after signing a memorandum on understanding on preparation for the 2018 AfDB annual meeting in Busan held in Seoul on Sept. 19, 2017. (Photo courtesy of the Ministry of Strategy and Finance)(Yonhap)
The AfDB was established in 1964 as a way to contribute to the economic and social development through promoting investment with 54 member countries from Africa and 26 from other continents. South Korea joined the organization in 1984.

“Next year’s session is special for both South Korea and the AfDB as it is the fifth of its kind to be held outside the African continent,” Vice Finance Minister Ko Hyoung-kwon said at the signing ceremony in Seoul attended by AfDB Secretary-General Vincent Nmehielle. “South Korea is one of the best partners for the AfDB as we are the world’s first country to have become a donor nation from a recipient of international aid.” (Yonhap)