[ The Korea Herald – Send E-mail ]
Korea accelerating public diplomacy for 2018 PyeongChang Olympics
By Yonhap
Published : Sep 18, 2017 - 16:49
Updated : Sep 18, 2017 - 16:49
With the 2018 PyeongChang Winter Olympics less than five months away, South Korea is accelerating its public diplomacy to promote the South Korea-hosted international sports event where the cultural allure of Korea could be illuminated globally.

The Ministry of Foreign Affairs has recently named Vice Foreign Minister Cho Hyun to head its special team tasked with supporting hosting of the Winter Olympics and the following Paralympic Winter Games scheduled from February to March in the alpine city.

The ministry is utilizing its 182 overseas diplomatic missions to reach out to the world to promote the sports games. 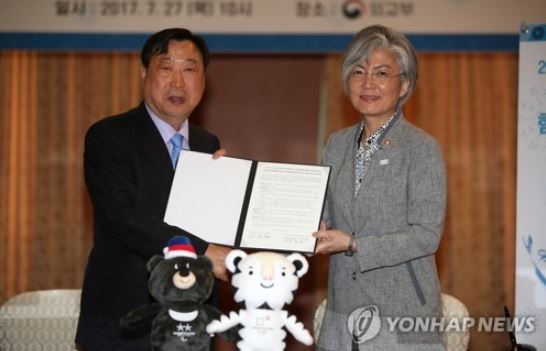 This file photo shows Foreign Minister Kang Kyung-wha (R) posing with Lee Hee-beom, the chief organizer of the PyeongChang Winter Games, after signing an agreement for cooperation in July. (Yonhap)
As part of that effort, a public diplomacy delegation composed of South Korean college students staged a variety of cultural performances and events last month in the Visegrad Four countries -- the Czech Republic, Hungary, Poland and Slovakia -- a region traditionally active in the winter sports games.

They included a flash mob in the Czech Republic featuring the South Korean traditional hanbok garment and folk song Arirang as well as the youth pubic diplomacy delegation's street march in Prague, donned in hanbok and Olympics T-shirts.

In May, the South Korean Embassy in Nigeria also hosted a local drawing contest featuring the PyeongChang Winter Olympics while Kim Hyoung-zhin, South Korean ambassador to the European Union, joined a marathon in Brussels dressed in a PyeongChang Olympics T-shirt.

Back in Seoul, dozens of foreign journalists, producers and bloggers were invited to tour major Olympics facilities in PyeongChang in June as well as key cultural sites in Gangwon Province, home to the host city.

The foreign ministry said the string of public diplomacy events would help shape friendly images of South Korea and the approaching sports games as well as enhancing South Korea's friendship with foreign countries.

South Korea plans to continue to hold cultural events for the Olympics at home and abroad to help with a successful hosting of the sports event, including invitations of foreign leaders to South Korea during the Olympics, according to the ministry.

One key point of the ministry's Olympic diplomacy will be the United Nations General Assembly's conventional adoption of a resolution calling for a so-called Olympic truce ahead of a regular Olympic event, which is expected to take place in November for the upcoming games.

"Olympics and sports are a common issue for the whole world which any country could come and talk openly about," a ministry official said. "The attraction of Korea could be shown (to the world) more naturally in the process of promoting the PyeongChang Olympics."

Ambassador for Public Diplomacy Park Enna vowed increased public diplomacy efforts through which "the 2018 PyeongChang Winter Olympics could impress the world and South Korea's allure could be spread." (Yonhap)