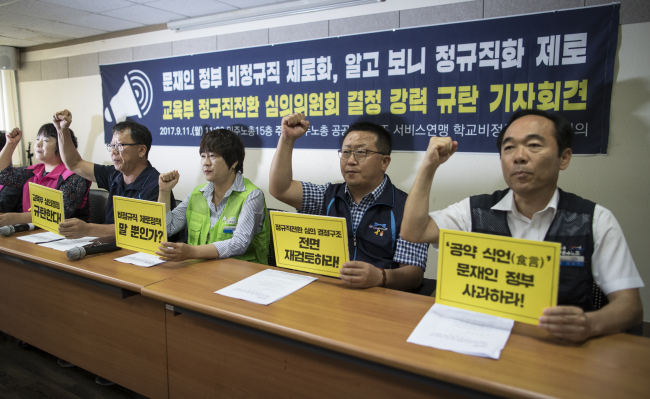 Members of the Korean Confederation of Trade Unions hold a press conference Monday to denounce the Ministry of Education’s guideline to not convert contract teachers to regular ones. Yonhap
There are over 40,000 irregular teachers in South Korea who hold part-time or contract-based teaching positions at schools. Permanent teaching jobs, which come with a teachers pension, are available to only those who pass the state-administered teacher qualification exam.

The Education Ministry said irregular teachers should be given the same job benefits, except the pension, as state-certified teachers, but giving them permanent status would be tantamount to reverse discrimination against those who passed the exam or those who have been preparing for it.

The decision came as various government organizations and state-run corporations scrambled to devise a detailed action plan to implement President Moon’s policy of “zero irregular jobs” in all public sectors within his five-year term.

Irregular teachers and their representatives have demanded permanent employment status and other benefits, as well as an increase in wages.

Their demand for the status shift, however, had sparked sharp criticism among aspiring teachers, who enter highly competitive four-year education colleges to become full-time teachers, one of the requirements for taking the annual teacher certification examination.

Teaching is one of the most coveted professions here for its job security and lifelong pension.

The education authority, however, announced in August that it would sharply cut recruitment numbers for teachers next year, citing Korea’s falling birthrate.

There are 46,000 contract teachers in Korea -- 32,734 of them working on a one-year contract at public schools nationwide. The total figure represents 9.5 percent of all teachers at schools as of 2016 according to ministry data.

In addition, 8,343 part-time instructors teach specific subjects like English conversation and physical education. Their contracts can be extended by two years by law.

Among part-time instructors, 1,034 daycare teachers at kindergartens are likely to become permanent employees, as are school administrative staff members, the ministry added.

Cities and provinces’ education offices are set to decide whether to follow the ministry’s guidelines by the end of this month.