[ The Korea Herald – Send E-mail ]
[Eye] The guilt of a South Korean cram school mogul
MegaStudy founder says Korea has no future if cramming continues
By Bak Se-hwan
Published : Sep 8, 2017 - 16:54
Updated : Sep 9, 2017 - 14:22
In the 1990s, Son Joo-eun was a much sought-after tutor offering only a select few affluent students tips on how to score well in the national college exam. Having grown up poor and landed a place at the elite Seoul National University, he easily took home 50 million won ($47,000) from his tutoring work, enough to buy a standard two-bed room house in Seoul back then, each month.

The life of the star hagwon teacher soon got on a fast track to fame and fortune. 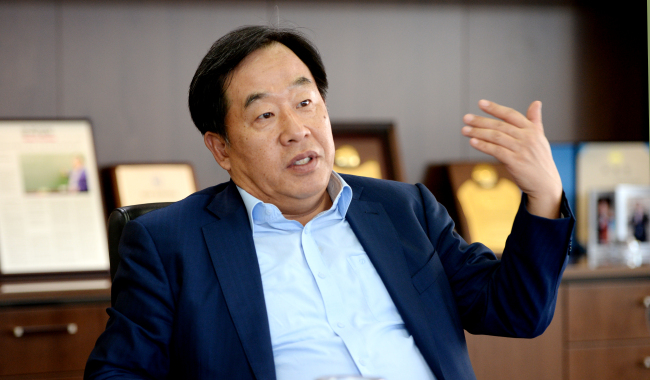 Son Joo-eun, head of MegaStudy (Photographed by Park Hyun-koo/The Korea Herald)
In 2000, he founded an online cram school, MegaStudy, offering test-prep courses to a much wider audience. The venture, which started off with five staff and an initial paid-in capital of 300 million won, became an instant sensation among students and parents, bringing him success that he had never imagined.

“I’d earned money by taking advantage of the country’s obsession with college diplomas,” Son, now 56, said in his super-spacious office at MegaStudy’s headquarters in Seoul.

Deep inside, there has always been a sense of guilt, Son said, that he is capitalizing on cruelty that pushes young students into long hours of afterschool study and fierce competition to enter top universities.

In 2004, MegaStudy debuted on the Kosdaq, a tech-focused secondary bourse. In the years that followed, the firm’s market capitalization peaked at a whopping 2.5 trillion won. Investors loved Son’s venture as a textbook case that turned the country’s obsession with education and a high internet penetration rate into a perfect business opportunity. 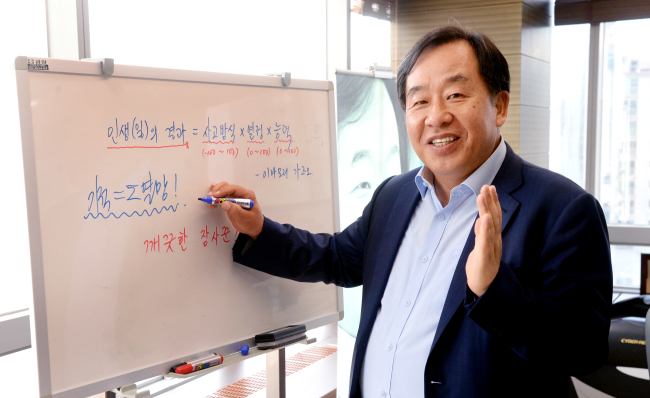 (Photographed by Park Hyun-koo/The Korea Herald)
The business has since taken a downward turn, as competition thickened and saturation neared in the online test-prep services market. MegaStudy’s market cap has dropped almost ten-fold to stand at 126 billion won Friday.

Son stepped aside from the company’s management and the cram school business as a whole in 2014, though he still remains on the board of directors as chairman and is the firm’s No. 1 shareholder with over 26 percent of shares.

Now, he is a champion of education reform. Cramming won’t prepare today’s students for the AI-focused “fourth industrial revolution,” he believes.

“The time has passed when test scores determined a student’s life and career path,” Son said.

“In the future, they won’t determine anything nor do they guarantee any of the lucrative jobs they had before. In fact, jobs are disappearing fast, with robots replacing human input,” he said.

Schools and private education businesses must adopt creative, innovative teaching, breaking away from the old model that focuses on written tests, he said.

“Society is already dramatically shifting to a stage where creativity, deep understanding of human nature and connectivity are values sought in young talent since only with those humans can beat the artificial intelligence,” he said.

Korean students, still locked in the old system of public schools and private educational institutes, may face challenges in the future, since they have never been taught how to innovate, focusing instead on high test scores and memorization skills, Son warned.

The education mogul says he regrets the way he found success and wants to give back to society.

The Yoonmin Foundation, named after his daughter, who died in a car accident in 1991, helps innovative minds to turn their ideas into real business. This year, 500 individuals and groups applied for the grant.

“We need a change in mindset to support more innovative activities by young people,” Son said. “Even with a simple, creative idea that doesn’t catch the eyes of investors, they can knock at our door for support.”

As for the cram school business, Son predicts a very grim future.

With innovation becoming an integral part across industries, the society will see an advent of new jobs that combine both in-demand skills and new, creative ideas, something Son said can never be taught at cram schools.

Son added that the private education market will have to develop a new, sustainable business model to survive.

Many parents and observers think test-prep services will have a market here as long as the country’s obsession with top universities remain, but Son believes otherwise.

At least the days of a factory-like, large-scale cram schools are gone, he stressed.

“Schools and colleges alike have long favored elitism that spurs competition. In the race, rich families that can spare more resources for their kids have an upper hand,” Son said, stressing that it is now time to change that.

“We are talking about a business here, but it is also important to acknowledge that what we sell in the market partly shapes kids’ educational environment. We need to have a sense of responsibility and prepare to take on new roles in the rapidly changing educational paradigm.”