In a parliamentary inquiry a day after the North conducted its sixth and largest nuclear test at Punggye-ri site, Defense Minister Song Young-moo told lawmakers that the military suspects the North may have secured technology to produce miniaturized nuclear warheads that weigh less than 500 kilograms.

“The lighter the warhead, the more effective it becomes. … We believe they have succeeded,” in miniaturizing the warheads, said Song, adding that the nuclear warhead used in Sunday’s nuclear test appeared to be small and light “enough to be fit into an ICBM.”

Having a miniaturized warhead is the key to developing a workable nuclear-tipped ballistic missile capable of hitting the US mainland. Nuclear states, such as the US and Russia, deploy nuclear weapons whose weight ranges from 110 to 500 kilograms.

The Defense Ministry, however, downplayed Song’s remark later, saying the minister did not mean to suggest the North’s success in miniaturizing nuclear warheads, as his argument was based on the image of a warhead released by the North’s state media Sunday, which could be a mock-up. 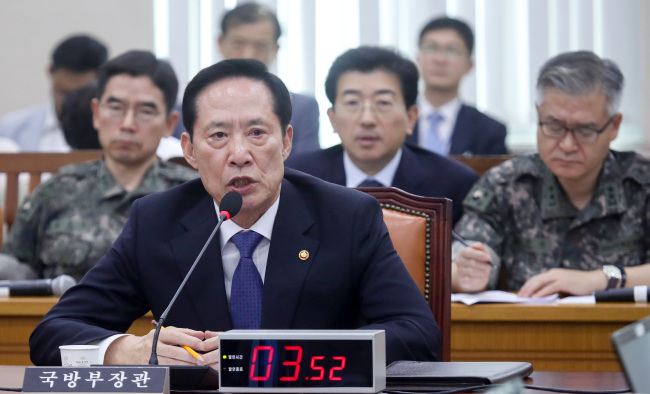 Defense Minister Song Young-moo testifies at the National Assembly. Yonhap
His comment came amid mounting speculation that Sunday’s test may have been a game changer in North Korea’s decadeslong nuclear ambition. Experts said it shows significant progress in developing a nuclear-tipped ICBM missile, a goal it has been pursuing since its first nuclear test in 2006.

“North Korea might have used less nuclear fission material to miniaturize the warhead. In that regard, the North has succeeded in miniaturization when it comes to the size of the warhead,” said Lee Chun-geun, a researcher at the Science and Technology Policy Institute.

A hydrogen bomb usually uses a primary atomic bomb to trigger a secondary and much larger explosion, with the first stage being based on nuclear fission -- splitting atoms -- and the second on nuclear fusion. In doing so, it can produce much more power than traditional atomic bombs, analysts said.

But the remaining challenge would be securing reliable re-entry technology that can protect a nuclear warhead from extreme and temperature when it is plummeting through the atmosphere from outer space, Lee noted.

Based on an image released Sunday by North Korea showing its leader Kim Jong-un visiting the “Nuclear Weapons Institute” to view what appeared to be a two-stage hydrogen warhead, some analysts estimated that the nuke detonated could be a thermonuclear bomb whose yield was adjusted.

Following the underground test in Punggye-ri, North Korea’s state-run media claimed that the warhead was designed to have a variable yield, saying “the explosive power of which is adjustable from tens kilotons to hundreds kilotons.”

The reason for reducing the explosive yield might have been related to worries that a stronger blast could bring impact to the cross border region with China and volcanic activities at Baekdusan, said Seo Kyun-ryeol, a nuclear engineering professor at Seoul National University, in an interview with local media.

“I don’t think North Korea needs more nuclear test to enhance its capability … they appear to have reached a point where they can adjust their nuclear capability. It is meaningless to discuss whether Sunday’s nuclear test used hydrogen bombs,” Seo said.