The Moon Jae-in government has pledged to levy taxes on the clergy from 2018 onwards as part of its drive for equitable taxation, although people working for churches and temples have been exempted from paying income tax until now, as their work has been regarded as a spiritual service, not labor.

"We estimate the amount of taxes to be paid by employees of religious organizations next year to be around 64.7 billion won," Chung Chang-soo, head of the National Finance Institute, said in a report, noting 89 percent of religious employees currently do not pay taxes. 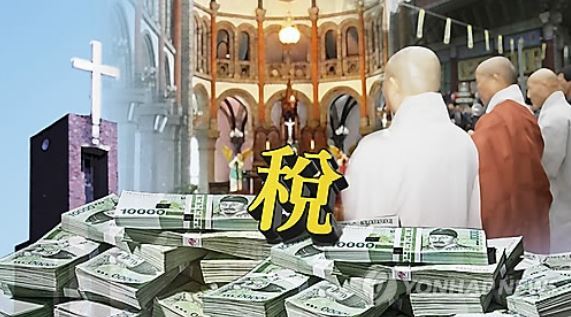 (Yonhap)
About 11 percent of the clergy currently pay taxes on a voluntary basis, and the amount reached 8 billion won as of 2014, he said.

The Ministry of Strategy and Finance, however, has put the amount of taxes to be collected from religious groups at about 10 billion won.

"The figure 64.7 billion won seems to be a bit excessive without considering the income level and various tax breaks for people working for religious organizations," a ministry official said. (Yonhap)