Such challenges, combined with the Korea-China tension over the Terminal High Altitude Area Defense and the prolonged slow growth trend, is likely to further weigh down on Asia’s fourth-largest economy.

“We cannot exclude the possibility that the geopolitical risks (in the Korean Peninsula) should increase, in the wake of the international community’s response and North Korea’s backlash (against it),” Kim said. 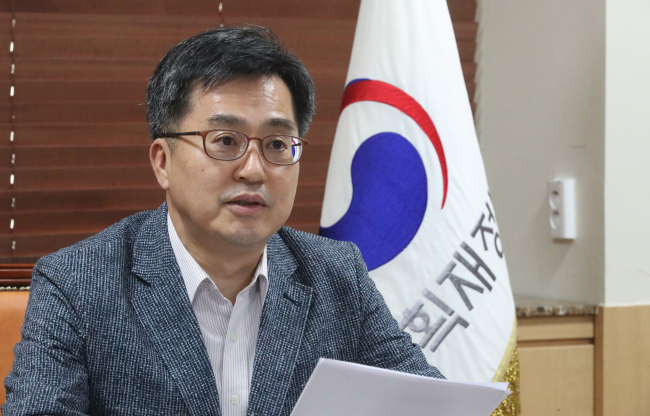 The minister also pointed out that the North’s military action came amid various economic uncertainties, such as trade tensions with the US.

After an artificial earthquake of a 5.7 magnitude was detected near North Korea’s nuclear site on Sunday afternoon, Pyongyang claimed that it had successfully conducted a test involving a hydrogen bomb which can be loaded on its intercontinental ballistic missile. Recognizing the North’s assertion, South Korea’s presidential office Cheong Wa Dae vowed for most powerful sanctions possible against the reclusive regime.

Seoul and Washington, meanwhile, have been locking horns over the FTA, with US President Donald Trump taking the tension a step further by indicating a complete pullout from the bilateral deal.

The US president on Saturday told reporters that he would summon his advisers in the upcoming week to review the possibility of scrapping the bilateral trade deal, confirming earlier reports that such a move was on its way.

“It is very much on my mind,” Trump said during his trip to hurricane-hit Houston, in answer to reporters’ questions on whether he would be discussing the withdrawal starting this week.

His remark came in line with a Washington Post report that the president had ordered his aides to prepare for termination of the deal. Wall Street Journal and Inside US Trade also claimed that the White House would hold a related meeting Tuesday and initiate the process.

Last month, the two countries sat in their first meeting to review the bilateral FTA, but failed to bridge the gap on the issue.

President Trump, reflecting his “America First” policy, has repeatedly claimed the trade deal has caused large deficits in the US trade with South Korea -- a claim objected to not only by Seoul but also by a number of top US officials, including national security adviser H.R. McMaster and Defense Secretary Jim Mattis.

His aides’ concern is that conflict with Seoul is not desirable amid recent tensions over North Korea’s nuclear and ballistic missile programs.

Observers point out, however, that the US president’s allusion to a total termination of the deal may be an exaggerated gesture to add pressure on Seoul to accept Washington’s renegotiation terms.

According to Article 24.5 of the deal, the agreement is to be terminated 180 days after the date either party notifies the other in writing that it wishes to withdraw. Unless either of the parties request a consultation in written form within 30 days, the termination is to take effect.

But disputes persist on whether Trump is entitled to make the decision without the consent of Congress, especially as the US law views trade agreements as “congressional-executive agreements,” which require legislative approval for effectuation or abolishment.

It was amid such uncertainty that a number of US media outlets, including the Wall Street Journal, highlighted the possibility that Trump may just be using the termination agenda to exert pressure on the Korean government.

“We will be prepared for all possible scenarios,” said an official of the Ministry of Trade, Industry and Energy.

“The government said that it would continue an open-minded discussion with the US (on the FTA renegotiation) and there has been no change to such a plan.”