With many viewing Trump’s gesture as an attempt to gain an upper hand in stalled renegotiations, a Seoul official with the Trade Ministry said that South Korea has no change in its policies on the FTA with the United States despite Trump’s hints.

The US president on Saturday told reporters that he would summon his advisers in the upcoming week to review the possibility of scrapping the bilateral trade deal, confirming earlier reports that such a move was on its way.

“It is very much on my mind,” Trump said during his trip to hurricane-hit Houston, in answer to reporters’ questions on whether he would be discussing the withdrawal starting this week.

His remark came in line with the Washington Post’s report that the president had ordered his aides to prepare for termination of the deal. Wall Street Journal and Inside US Trade also claimed that the White House would hold a related meeting Tuesday and initiate the process. 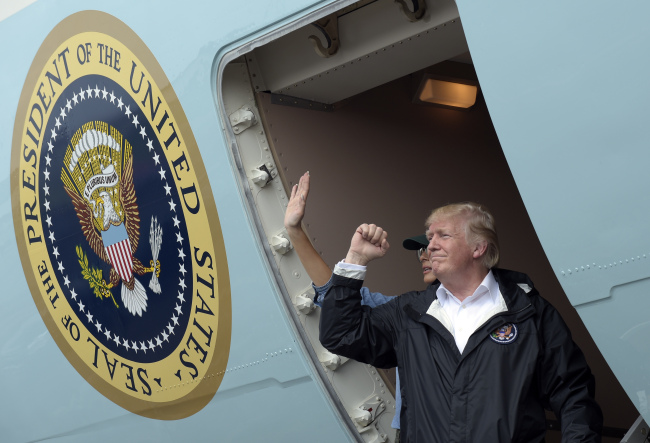 US President Donald Trump waves at the crowd upon leaving hurricane-hit Houston on Saturday. (Yonhap)

Last month, the two countries sat in their first meeting to review the bilateral FTA, but failed to bridge the gap on the issue.

President Trump, reflecting his “America First” policy, has repeatedly accused the trade deal of causing large deficits in the US trade with South Korea -- a claim refuted not only by Seoul but also by a number of top US officials, including national security adviser H.R. McMaster and Defense Secretary Jim Mattis.

His aides’ concern is that conflicts with Seoul is not desirable amid recent tensions over North Korea’s nuclear and ballistic missile programs.

Observers point out, however, that the US president’s allusion to a total termination of the deal may be an exaggerated gesture to add pressure on Seoul to accept Washington’s renegotiation terms.

According to Article 24.5 of the deal, the agreement is to be terminated 180 days after the date either party notifies the other in writing that it wishes to withdraw. Unless either of the parties request for a consultation in written form within 30 days, the termination is to take effect.

But disputes persist on whether Trump is entitled to make the decision without the consent of the Congress, especially as the US law views trade agreements as “congressional-executive agreements,” which require legislative approval for effectuation or abolishment.

It was amid such uncertainty that a number of US media outlets, including the Wall Street Journal, highlighted the possibility that Trump may just be using the termination agenda to exert pressure on the Korean government.

Military threats from Pyongyang -- including its sixth nuclear test carried out Sunday -- also made it unlikely for the US to rush withdrawal from the FTA.

Meanwhile, South Korea’s trade surplus to the US plummeted in the first half of the year, casting doubt on Trump’s claim that the deal delivered economic losses to US trade.

Data from the US Department of Commerce showed Sunday that Korea’s trade surplus to the US stood at $11.2 billion, down 31.9 percent from the same period last year, bringing down its ranking in amount from sixth to 10th.

The US Chamber of Commerce warned that a sudden abolishment of the trade deal would kindle conflict between industries and the White House.

“KORUS has been the economic cornerstone of a strong US-Korea alliance. While not perfect, it has delivered economic benefits to both sides and has made us closer partners,” Wendy Cutler, the chief US negotiator for the FTA, wrote in a contribution to The Hill last week.