“The economic community agrees that it is necessary to shift the fundamental paradigm of the economy,” said its Chairman Park Yong-maan, during a meeting with Paik Un-gyu, minister of trade, industry and energy, and other chamber officials in Seoul.

“It is expected that innovation efforts will be increased across all sectors, along with efforts to resolve polarization.” 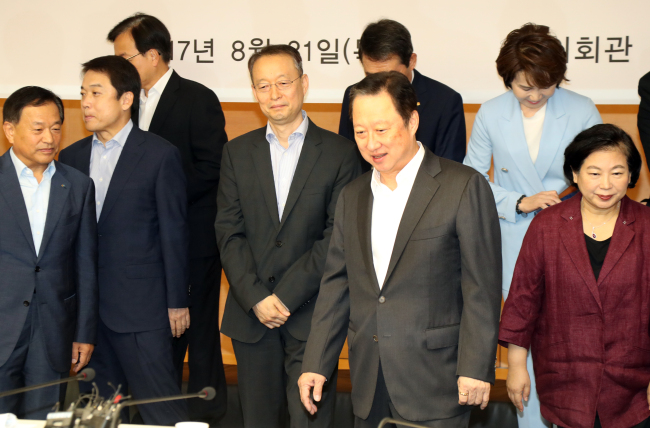 Korea Chamber of Commerce and Industry Chairman Park Yong-maan (front) meets with Paik Un-gyu, minister of trade, industry and energy, and other chamber officials during a meeting in Seoul on Thursday. (Yonhap)
The government released its state budget plan for 2018 on Tuesday, calling for 429 trillion won ($381 billion) in spending. The budget proposal marks a 7.1 percent on-year increase, the steepest annual rise in nine years following the 2008 global financial crisis, in an effort to back President Moon Jae-in’s people-focused and income-led growth economic blueprint.

Deputy Prime Minister for economic affairs and Finance Minister Kim Dong-yeon said Tuesday that the government intends to spend money to bring about a paradigm shift in the Korean economy, adding that it was time to start injecting funds and increasing spending in order to minimize mid- and long-term costs.

Some local business groups have voiced concerns over the new administration’s four key economic pillars of job creation, wage increases, innovative growth and creating a fair economy, as they fear potential fiscal backlash. However, Park says that innovation is key to Korea’s financial competitiveness and sustainability.

“I believe that a virtuous circle of sustainable growth and wage gap disparity could be possible if the nation’s capacity is strengthened through innovation,” said Park.