As of April, 6.46 million children are attending school, according to data compiled by the Ministry of Education. 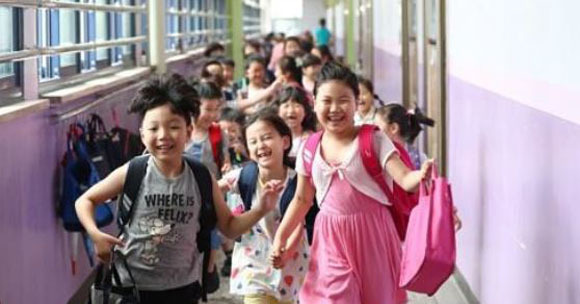 However, the number of elementary school students rose 0.1 percent, growing by 1,384 students. The ministry attributed an increase in this year’s first graders to a higher birthrate in 2010.

By region, Sejong was the only city in South Korea that saw an increase in all four categories. The number of high school students in Sejong grew a whopping 18.2 percent this year. All other cities and provinces surveyed suffered a decline in the numbers of kindergarten, middle and high school students.

The number of students from multicultural families increased by 10.3 percent to 109,837, surpassing the 100,000 mark for the first time since the government began tracking the number in 2012. That accounted for 1.9 percent of all students here.

In elementary school alone, the number of multicultural students went up by 11.8 percent to hit 82,733, which the ministry attributed to an increased number of international marriages.

The number of students that a teacher takes care of in a class came to 16.4 for elementary schools, 14 for middle schools and 13.2 for high schools.

According to the Organization for Economic Cooperation and Development, the average numbers in 2014 for its 35 member countries stood at 15.1, 13 and 13.3, respectively.