The club announced Monday (local time) that Paik signed a three-year deal, although he will spend this season with Girona's B side, Peralada, in the third-tier Segunda Division B.

"I'm very happy to start my new career at Girona FC," Paik wrote on his Instagram. "I want to give back to fans for their support with hard work."

The move ends Paik's stint with FC Barcelona, where he has spent the last seven years. He was last with the B team of the Catalan giants, but failed to fit into head coach Gerard Lopez's plan this season. 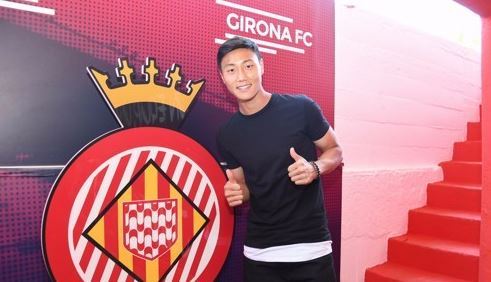 This captured photo from Girona FC`s official website shows South Korean midfielder Paik Seung-ho posing for a photo in front of the Girona FC emblem. (Yonhap)
The 20-year-old midfielder was one of the players who received a three-year suspension by FIFA after Barcelona violated international youth transfers. His ban ended in January 2016.

Paik had a year left on his contract with Barcelona, but the two sides reportedly terminated the deal on mutual consent, allowing the player join Girona without a transfer fee.

"I also want to thank everyone who has been part of my life at FC Barcelona," Paik said. "It has been a great run of seven years in a place where I have felt like home."

Paik recently represented South Korea at the FIFA U-20 World Cup, where he scored two goals and helped the host nation reach the round of 16. He has yet to play for the senior side.

Girona, founded in 1930, joined the top-flight Spanish Primera Liga for the first time in club history after finishing runners-up to Levante UD in the second division last season. The northern Catalan club had a 2-2 draw against Atletico Madrid in their season opener on Saturday. (Yonhap)