A crowd of 80,000 gathered at the three-day KCON LA 2017 held from Friday at the Los Angeles Convention Center and the Staples Center in the American west coast city, according to CJ E&M, organizer of KCON. 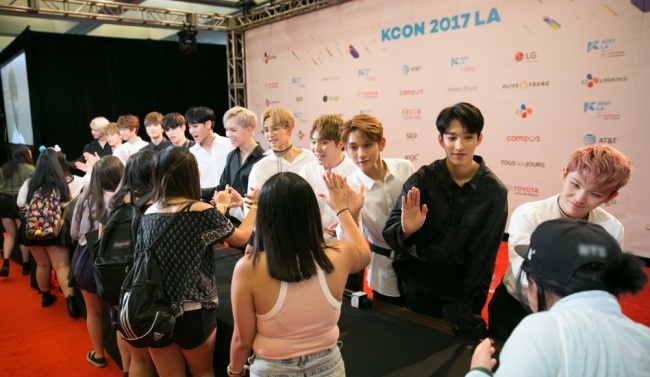 (Yonhap)
First launched in Irvine, California, in 2012, KCON is held throughout the world and has become an annual pilgrimage for K-pop fans around the globe, attracting more than 350,000 attendees throughout its five-year run.

"Compared to the inaugural KCON held in Irvine, the crowd has increased by a record-high eightfold," a CJ E&M representative said.

(Yonhap)
Cosmic Girl, SF9, Girl's Day, VIXX and Wanna One, among other leading K-pop artists, performed in front of a sold-out crowd for two days at the Staples Center. Over 100 Korean culture-related programs, such as make-up products, fashion foods and K-pop dance lessons were presented at the L.A. Convention Center.

"Based on the management philosophy of CJ E&M's top executives, KCON has grown into a platform that facilitates the globalization of Korean culture," Shin Hyung-gwan, head of CJ E&M's music content division, said.

Starting with Mexico City in March, KCON events were held in Tokyo and New York. KCON will head to Australia for the first time in the Oceania region on Sept. 22-23. (Yonhap)