South Korea's entertainment industry was one of the biggest beneficiaries of the diplomatic normalization with China in 1992. Its pop songs, dramas and movies flooded into the once banned communist country, which has become the springboard for "hallyu," or the growing popularity of South Korean popular culture.

But they have recently emerged as a victim of politics. Korean showbiz faces the hardest time since entering China 25 years ago amid a raging anti-Korean sentiment and state restrictions sparked by ongoing diplomatic feuds over the deployment of a U.S. missile defense system in South Korea.

The two Cold War foes established diplomatic ties on Aug. 24, 1992, opening the way for cultural exchanges between the two countries.

China had its first taste of Korean pop culture in 1993, when the South Korean drama "Jealousy" was bought and aired by China's state-run CCTV. Since then, over 100 Korean TV series were broadcast in China, mostly to positive reaction.

Hallyu, or the Korean Wave, hit its stride in China through TV shows during the early-to-mid 2000s with hit series such as "Autumn Tale" (2000) and "Daejanggeum" (2005). But the presence of Korean television shows later waned in China after Beijing imposed a cap on foreign TV dramas aired in the country.

It wasn't until "The Heirs," starring Lee Min-ho and Park Shin-hye, was made available via the online streaming platform iQiyi in 2013, that hallyu entered a renaissance phase. Lee became one of the most sought-out celebrities, appearing on "New Year's Gala," one of China's premier television events on CCTV.

Demand for Korean TV shows soared with the airing of "My Love from the Star," a time-travel alien fantasy series starring Kim Soo-hyun and Jun Ji-hyun, and later skyrocketed with last year's "Descendants of the Sun," featuring Song Joong-ki and Song Hye-kyo. 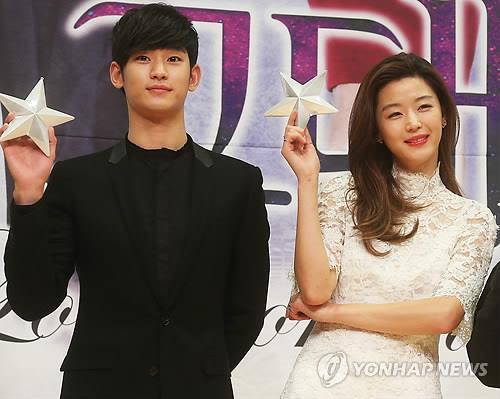 South Korean actor Kim Soo-hyun (left) and actress Jun Ji-hyun of "My Love from the Star" pose for a photo during a publicity event in Seoul on Dec. 16, 2013. (Yonhap
"In my view, Korea has relatively more appealing and talented actors. Also the Korean production industry's tight screenplays and films seem to have attracted demand from Chinese viewers," said a South Korean producer who is currently working for a Chinese satellite TV network.

Han Jae-hyuk, head of the Korean Cultural Center in China, pointed out how the term hallyu was first coined in China.

"Hallyu first emerged from China after H.O.T was showcased in the country in 2000. After establishing diplomatic relations, the two sides have had a wide range of exchanges, to the degree that there is almost no Chinese person who hasn't watched a Korean drama," said Han.

But for the past year or so it's become impossible to see Korean TV shows in China. China virtually banned South Korean cultural and entertainment products in protest of Seoul's decision to set up a Terminal High Altitude Area Defense (THAAD) battery on its soil.

Seoul says it is to better protect itself from the ever-rising military threats posed by North Korea, but Beijing believes the THAAD system can be used to monitor its own military activities, thereby hampering regional peace and stability.

Partnerships and joint projects in areas such as TV shows, games and music between the two countries were abruptly suspended, seriously hurting South Korean companies that had made hefty financial commitments.

SBS TV's "Saimdang, Memoir of Colors," for example, was intended to be aired in South Korea and China simultaneously, but Beijing's broadcast regulator is still sitting on its approval. TV footage of Korean stars was edited out, and scheduled concerts and fan meet-and-greets for K-pop stars, such as EXO and BIGBANG, were banned without explanation.

But the ban doesn't necessarily mean the Chinese aren't consuming Korean products. Piracy over the Internet has allowed unfettered access to even the most up-to-date Korean TV shows. News stories on "Legend of the Blue Sea" and "Guardian: The Lonely and Great God" have racked up billions of views on Chinese portals, suggesting that Korean shows are being widely pirated.

In the past, most of the Chinese networks had paid for licenses to adopt South Korean programs, but intellectual property theft is becoming more common after the culture ban, with copycat shows of "Three Meals a Day," "Fantastic Duo" and Youn's Kitchen" having been introduced.

On the music record front, K-pop is still going strong.

Experts say that in order to better appease China in general, creators must prioritize the quality of their content.

"Most of the time, China tends to be engaged with the U.S. and Japan in geopolitical issues. But it's not as if, for example, American and Japanese animation movies perform poorly because of pending issues," said Kim Ki-heon, head of Korea Creative Content Agency's Beijing office.

Others say that Korea should also focus on exporting its skills and technology in culture, alongside selling packaged cultural products to China.

"Rather than stressing that this or that is a 'Korean' movie, more companies should try to apply their ideas and technology within the Chinese market and try to increase their clout in China," said Kim Pil-jeong, head of the Korean Film Council's Beijing office. (Yonhap)