The credit default swap (CDS) premium for South Korean foreign exchange stabilization bonds with a five-year maturity reached 70 basis points as of Monday, the highest level since 71 basis points on Feb. 25, 2016, according to the data by the Korea Center for International Finance. 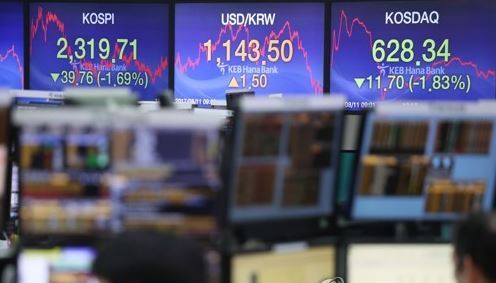 The spread mirrors the cost of hedging credit risks on corporate or sovereign debt. A rise implies a deterioration in the credit of government bonds and higher costs for issuance. A basis point is 0.01 percentage point.

The jump in South Korea's CDS premium comes amid a bitter verbal war between the US and North Korea over Pyongyang's nuclear and missile programs.

Following North Korea's launches of two intercontinental ballistic missiles in July, Donald Trump has threatened to rain "fire and fury" on the rogue nation over its nuclear threats, while Pyongyang has pushed back, saying it will fire missiles near the US territory of Guam.

South Korea's financial authorities have pledged to keep close tabs on the so-called North Korea risk and its consequences on the domestic financial market.

The finance ministry and the central Bank of Korea said they would take necessary steps should the local currency tumble against the US dollar and other destabilizing events taking place.

Some market watchers expressed worries that a prolonged crisis over North Korea's nuclear and missile programs could put a damper on South Korea's growth momentum.

"At the moment, the North Korea risk is having a slight impact on the financial market alone, but South Korea's consumption and corporate investment could take a hit if it drags on, dampening the country's economic growth," said Kim Jung-sik, a professor of Yonsei University in Seoul. (Yonhap)