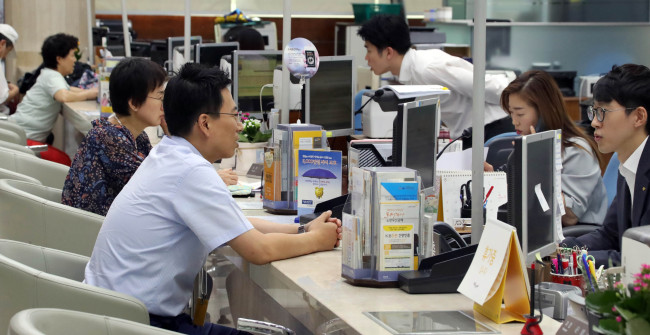 (Yonhap)
Households in South Korea have still appeared to flock to mortgage loans so far this month, despite the government’s strong measures on Aug. 2 to tighten mortgage borrowing, data showed Tuesday.

The average volume of household mortgage borrowings per day reached 407.1 billion won ($356.6 million) from 3,167.6 cases during Aug. 7-11, according to data compiled by the Financial Supervisory Service.

That was larger than the daily average in July, which came to 288.5 billion won from 2,509 borrowings.

From March to July, the daily volume fell short of 400 billion won, except for June, when borrowers took out 455.2 billion won from 3,374 loans due to the “seasonal rise in the demand for houses,” according to financial authorities.

Following the Aug. 2 measures, those taking out mortgage loans to buy a home in the regions are subject to stricter loan limits of up to 40 percent of the property value from 60 percent. The debt payment limit has been adjusted to 40 percent of income from 50 percent.

On the day the anti-speculation measures were released, borrowers applied for 3,192 mortgages, as the new regulations were to become effective the following day.

The FSS said Monday that the market in the second week of August was stabilizing from the first week.

In contrast, the rise in apartment prices has been seen slowing in the regions since early August, according to the latest data from Kookmin Bank.

Seoul’s apartment prices rose 0.08 percent weekly as of Aug. 7, down from a 0.37 percent surge the previous week. The price in Sejong remained flat in the first week of August, compared to a 0.58 percent rise a week prior, while that of Gwacheon remained steady for two consecutive weeks, after seeing a 0.27 percent rise in the third week of July. 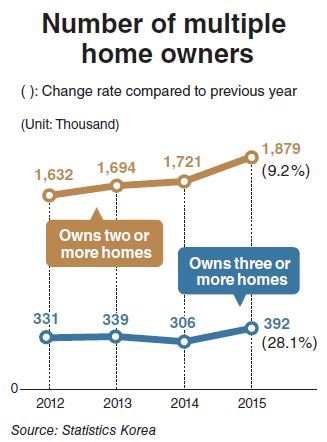 The number of people who own more than two real estate assets jumped 9.2 percent on-year in 2015 and 15.1 percent from three years before, according to a 2017 estimate from Statistics Korea. Those buying additional homes while already having more than two houses accounted for 14 percent of total home buyers in 2016 and 2017 nationwide, nearly double that of 2015, according to data from the Land Ministry.