Foreign investors maintained the selling trend for four consecutive days on the main bourse Monday, but their net sales of 252 billion won ($221.1 million) in stocks was overshadowed by net institutional purchases of stocks worth 357 billion won. 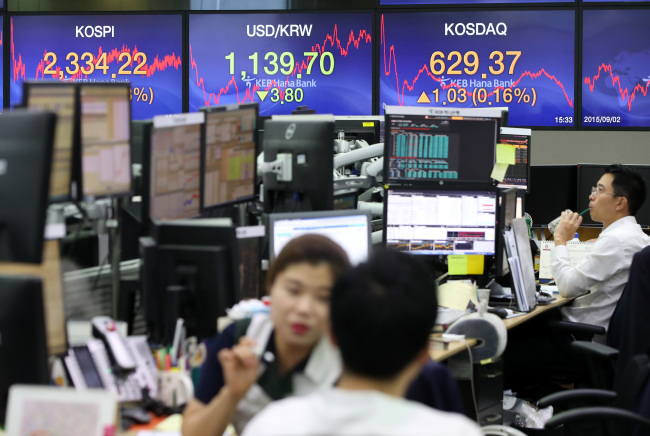 “(The phone call) allowed North Korea’s missile threat to wane, as it did in April,” Ma Ju-ok, an analyst at Hanwha Investment & Securities, wrote in a Monday report, citing a call on April 12 this year that put the brakes on a six-day losing streak for the Kospi after a North Korean missile test.

Some other analysts, however, said the North Korea threat would endure.

“The lingering tension on the Korean Peninsula will be inevitable until mid-August, when North Korea claimed it would fire at the US territory of Guam and the Korea-US joint military exercise Ulchi Freedom Guardian takes place,” Kim Ji-hyung, a strategist at Hanyang Securities, wrote in a Monday note.

Uncertainties from North Korea have for decades rattled local markets. The Kospi saw a 3.4 percent plunge on the date of previous North Korean leader Kim Jong-il’s death in December 2011. It also dropped 2 percent and 2.3 percent, respectively, from the two Koreas’ exchange of fire in August 2015 and the fifth nuclear test in September 2016.

But a string of North Korean missile threats posed little hurdle to a monthslong rally and foreign buying spree since President Moon Jae-in’s inauguration in May, until the US and North Korea upped the ante against each other with a war of words last week, causing a 3.3 percent slide in the Kospi for four days until Friday.

Meanwhile, Finance Minister Kim Dong-yeon said Monday he hoped to discuss ways to cope with impacts on the financial market with Bank of Korea Gov. Lee Ju-yeol on Wednesday.