South Korean prosecutors said Monday they have indicted a mixed martial arts fighter for his involvement in a match-fixing scam.

Bang Tae-hyun has been accused of taking a bribe of 100 million won ($87,950) from match-fixing brokers in exchange for throwing a bout at the Ultimate Fighting Championship event in South Korea in 2015. He will face a trial without detention.

According to the Seoul Central District Prosecutors' Office, Bang agreed to lose the contest against Leo Kuntz at UFC Fight Night 79 in Seoul. The scam, however, didn't succeed as the lightweight fighter apparently changed his mind at the last moment and went on to beat Kuntz with a split decision. 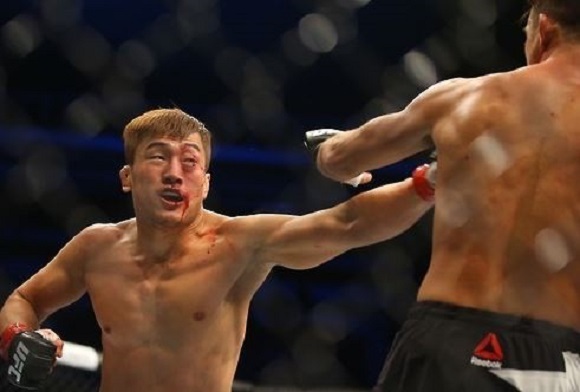 In this file photo, taken on Nov. 28, 2015, South Korean mixed martial arts fighter Bang Tae-hyun (L) lands a punch on Leo Kuntz of the United States during their lightweight bout at the UFC Fight Night 79 at Olympic Gymnastics Arena in Seoul. (Yonhap)
Bang reportedly decided not to throw the match after UFC officials warned him about fight fixing following a sudden shift in betting patterns on gambling websites. The 34-year-old was first listed as the slight favorite against Kuntz, but just hours before the fight the UFC officials caught drastic changes in odds that made him the underdog and his American opponent the overwhelming favorite.

Bang is no longer with the UFC, the world's largest MMA promotion. After the UFC event in Seoul, Bang fought once more in Germany at the UFC Fight Night 93, where he lost to Nick Hein by unanimous decision.

Bang was the seventh South Korean to enter the Octagon after he signed with the UFC in late 2013.

The prosecutors also indicted fight-fixing brokers and those who helped them, adding that one of them was former MMA fighter Kim Dae-won.

Kim, who previously completed in Japan-based MMA promotions like DEEP and Pride, told his acquaintances that he can fix the UFC bout by persuading Bang and later consulted with the brokers for fixing, according to the prosecutors. (Yonhap)