"The impact of (North Korean threats) on the financial and foreign exchange market is now expanding to the global level. A small shock will highly likely intensify market volatility,"

"The government will not let its guard down and maintain a watertight posture with strengthened risk management."

Tensions have spiked on the Korean Peninsula as North Korea and the United States exchanged bellicose rhetoric after the UN further tightened sanctions on North Korea for its two tests of intercontinental ballistic missiles last month. 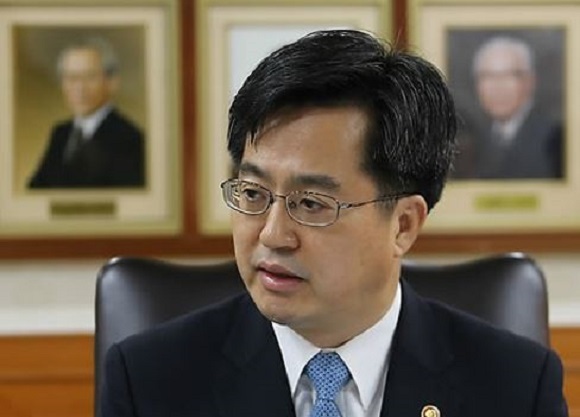 Finance Minister Kim Dong-yeon (Yonhap)
North Korea announced a plan to launch ballistic missiles toward the US Pacific territory of Guam. In response, US President Donald Trump has said the US military is "locked and loaded" to deal with North Korea's provocations and North Korea would be met with "fire and fury" if it continued to threaten the US.

"The government will strengthen around-the-clock monitoring of the market and take immediate action in accordance with its established contingency plan," Kim said.

On Wednesday, Kim is set to hold a luncheon meeting with Bank of Korea Governor Lee Ju-yeol in Seoul to assess the situation in the financial markets and discuss measures to stabilize the markets, if necessary, according to the central bank.

The meeting would be the second since the finance minister took his job in June. The two met in June and they agreed that the government and the central bank will use a "policy mix" -- a combination of fiscal and monetary policies -- as the government is pushing to create jobs and secure growth potential. (Yonhap)