[ The Korea Herald – Send E-mail ]
Top 10 groups suffer plunge in market caps on N. Korea risk
By Yonhap
Published : Aug 13, 2017 - 10:36
Updated : Aug 13, 2017 - 10:36
The market value of firms affiliated with South Korea's top 10 conglomerates has tumbled more than 5 percent over the past 10 days due to the escalating standoff between the United States and North Korea over Pyongyang's nuclear and missile programs, data showed Sunday.

The combined market capitalization of listed companies belonging to the 10 leading groups came to 884.6 trillion won ($772 billion) as of Friday, down 5.15 percent from Aug. 1, according to Chaebul.com and financial sources.

It accounted for 51.44 percent of the total value of companies traded on the main stock market, down 0.44 percentage point over the cited period.

Top conglomerate Samsung Group suffered a 7.6 percent drop in market value, with the figure for No. 2 Hyundai Motor Group posting a 1.1 percent decline. The market cap of the third-largest conglomerate SK Group tumbled 4.3 percent during the period. 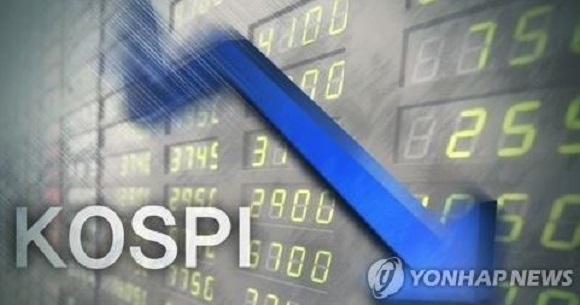 (Yonhap)
The South Korean stock market has been battered this month by growing geopolitical risks and foreign investors' strong profit-taking.

The benchmark Korea Composite Stock Price Index nose-dived 4.26 percent over the cited period with the value of top-cap Samsung Electronics sinking 8.8 percent to 289.5 trillion won, according to the data.

Foreign investors have been taking profits from gains in major tech firms since late July. In a bitter war of words over North Korea's missile provocations, US President Donald Trump has threatened Pyongyang with "fire and fury," while the North said it will fire four missiles near the US territory of Guam in the Pacific. (Yonhap)