BOK Gov. Lee Ju-yeol said he remained alert on economic and financial fallout the latest standoff over North Korea's nuclear and missile program could have on Asia's fourth-largest economy.

Lee made the comments in an opening ceremony of an exhibition of old books at Seoul National University. 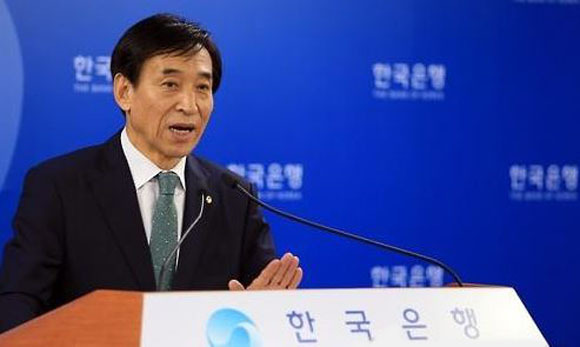 Bank of Korea Gov. Lee Ju-yeol (Yonhap)
Escalating tensions between North Korea and the United States have increased volatility in South Korea's financial markets. On Thursday, the benchmark Korea Composite Stock Price Index lost 8.92 points, or 0.38 percent, to 2,359.47. The local currency closed at 1,142.00 won against the US dollar, down 6.80 won from the previous session's close.

Earlier in the day, North Korea's military said it is considering a plan to fire four intermediate-range ballistic missiles around the US Pacific territory of Guam to "interdict the enemy forces on major military bases on Guam and to signal a crucial warning to the US."

The North's latest threat came as US President Donald Trump warned Tuesday that North Korea will be met with "fire and fury" should it stick to ambitions to hit the US with ballistic missiles.

The BOK, meanwhile, has entrusted more than 2,400 books to Seoul National University' Kyujanggak Institute for Korean Studies in a move that could pave the way for digitizing old books.

Some of the books date back to the Joseon Dynasty, which ruled the Korean Peninsula from 1392 to 1910.

Kyujanggak, the royal research library and institute of the dynasty, was meant to preserve kings' writings and calligraphy and serve as a repository for the royal genealogy. (Yonhap)