[ The Korea Herald – Send E-mail ]
New science official refuses to step down
By Catherine Chung
Published : Aug 10, 2017 - 15:41
Updated : Aug 10, 2017 - 18:22
President Moon Jae-in's newly appointed senior science innovation official said Thursday that she will not step down from the post amid growing calls for her resignation due to her involvement in a stem cell research fraud scandal 11 years ago.

Park Ky-young, a biology professor at Sunchon National University, served as a senior advisor to former President Roh Moo-hyun for some two years until 2006 when she resigned over a shocking revelation that Hwang Woo-suk, the country's leading stem cell scientist, used fabricated data on a research paper.

On Monday, Moon appointed Park to lead the Science, Technology and Innovation Office at the Ministry of Science and ICT, triggering searing criticism from scientists, politicians and civic groups that called her unfit for the post billed as a science policy control tower. 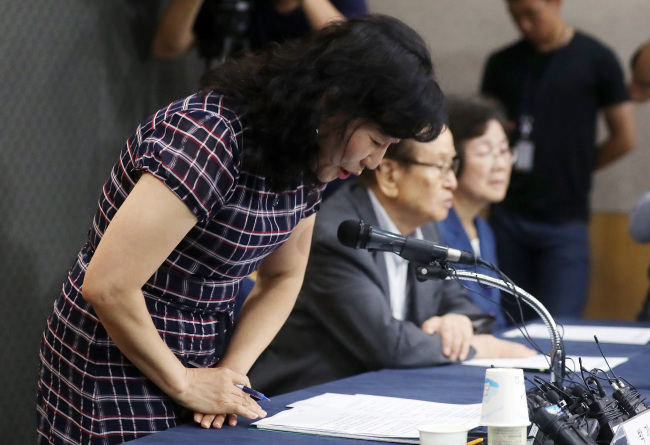 Park Ky-young, the chief of the Science, Technology and Innovation Office at the Ministry of Science and ICT, talks to reporters on Aug. 10, 2017. (Yonhap)
"I will try my best, if given an opportunity, I want to pay back the country with my work," Park told reporters in Seoul on Thursday, adding that she wants to lead the office so that researchers and scientists can freely focus on their work.

Opposition political parties as well as a group of scientists have demanded Moon retract the appointment, saying that Park was a co-author on the paper, a fact that sparked calls to accept moral responsibility for the scandal.

"I think I was not careful enough to be a co-author of Hwang Woo-suk's paper that was published in Science," Park said. "I am deeply regretful."

Park's job is a vice minister-level post but she can control the country's R&D budget worth 20 trillion won ($18 billion) in the science sector. Her post does not require a parliamentary confirmation hearing.

"Opposition parties, civic groups and the science community all oppose Park's appointment," Rep. Jun Heekyung, spokesperson of the main opposition Liberty Korea Party, said. "This is not an issue that would be forgotten if Park stalls for time while refusing to step down."

"Despite searing criticism, Park made clear she won't voluntarily step down," said Kim Yoo-jung,  spokesperson for the People's Party said. "Does this mean that Park, who was implicated in the Hwang Woo-suk scandal, is the only right person to oversee the control tower for science and technology that handles a 20 trillion won budget?"

Unless Park is willing to step down, Cheong Wa Dae should sack her, Kim said. (Yonhap)