The board of directors of Lotte Aluminum Co., a packaging material firm, decided not to extend the term of Shin Kyuk-ho on the decision-making body. The move by the affiliate marks the complete departure of Shin from the running of the company that he started with the founding of Dongbang Alumi Industry Co. in 1966.

The 94-year-old previously lost his board seats at other key companies belonging to South Korea's fifth largest family-run conglomerate as his tenure ended. 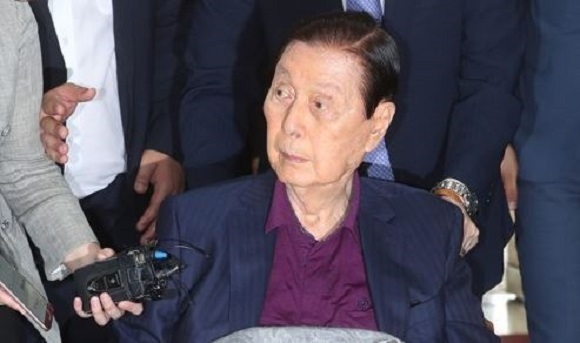 Shin Kyuk-ho, founder of South Korea`s fifth-largest business group Lotte, arrives at the Seoul Central District Court in the capital in a wheelchair on July 19, 2017, to stand trial over a string of corporate crime allegations. (Yonhap)
In June, the country's top court confirmed the designation of a nonprofit subsidiary of a law firm as the guardian of Shin, efficiently backing his second son and group Chairman Shin Dong-bin's argument that his father lacks the mental capacity to make meaningful decisions.

The petition seeking guardianship over Shin was filed in December 2015 by the group founder's younger sister amid a bitter feud between his two sons over the managerial control of the group.

While the elder son, Shin Dong-joo, claimed that the founder handpicked him as the successor for the retail group, Dong-bin insisted that his father was unable to make reasonable judgments due to mental health problems.

The family feud virtually came to an end after the incumbent chairman won shareholder support in March last year to tighten his grip on the group. (Yonhap)