[ The Korea Herald – Send E-mail ]
Korean economic recovery remains feeble due to weak production
By Catherine Chung
Published : Aug 8, 2017 - 10:36
Updated : Aug 8, 2017 - 10:37
The recovery pace of the South Korean economy has remained feeble for months as an upturn in exports and private consumption was offset by weak industrial output, a government report said Tuesday.

"The South Korean economy saw its exports and investment continue to rise and private consumption make a slight rebound, but its recovery pace remained lackluster due to a slowdown in the production of mining and manufacturing," the finance ministry said in its monthly economy assessment report called the "Green Book."

The report is based on the latest economic indicators of such key factors as output, exports, consumption and corporate investment, which could provide clues as to how the economy has been fairing in recent months. 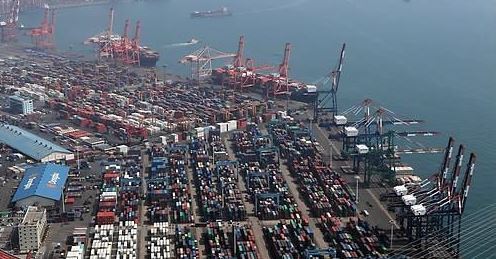 (Yonhap)
Exports extended its winning streak to nine months, which started in November last year, thanks to stellar overseas sales of chips and petrochemical products.

Facility investment rose 5.3 percent in June from a month earlier on increased demand for semiconductor equipment and machinery, spearheading the recent economic recovery along with exports.

Retail sales moved up 1.1 percent on-month in June on rising demand for clothes and cosmetics, turning around from a 1.1-percent drop from the previous month.

However, such gains were offset by the 0.2 percent on-month fall in industrial output and a 2.4-percent drop in construction-related investment.

The finance ministry said that external downside pressures, including geopolitical risks centered on North Korea and trade issues, will weigh on the South Korean economy in the coming months. (Yonhap)