“As we have previously announced in our reform resolution, we will promote our own ‘neo-conservatism’ and come up with detailed plans on issues such as inequality in labor, reducing pension gaps between generations and housing,” Lee Ok-nam, the committee’s spokesperson from the main opposition party said during a press meeting at the party’s headquarters in Yeouido, Seoul. 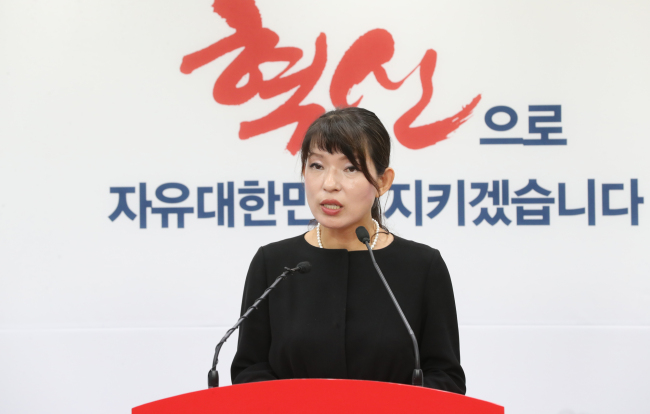 Lee Ok-nam, the spokesperson of Liberty Korea Party's reform committee (Yonhap)
The party’s reform committee had previously issued a statement that outlined plans to overhaul the party and promote its own brand of conservatism, saying it would pursue both fair competition in the market while protecting the welfare of the people.

“We will insert the term ‘neo-conservatism,’ and also (other) phrases in our party platform that urge the party to come up with consistent plans to overcome social issues such as the low birthrate,” Lee said.

A statement that the party pursues “small government” will be changed to say “effective government,” as the party should change along with society, it added.

The party will also make welfare one of its priorities as part of its reform plans. The change was a source of friction within the committee, which led to committee member Yoo Dong-yeol calling it quits. He said the party is neglecting the values he has sought “all his life” -- liberal democracy, a market economy and the Constitution.

While there have been calls to expel Park and some pro-Park lawmakers from the party as a way to hold them responsible for the crisis, the committee said further discussion on the matter is needed.

They committee was launched July 24 in the wake of the presidential election defeat on May 9, which was a special election to replace the ousted Park who had led the conservative bloc before she was president, in 2004. A new education institute for the party will also be established in order for all of the party’s lawmakers and members to take mandatory courses, the spokesperson said. Lee added that all candidates running in upcoming local elections, slated for June 13 next year, will have to take courses at the institute.

“We will also build a new networking program to bring in new members and build supporter base among the young and women, who we lack support from,” Lee said.

A poll revealed by Realmeter on Monday showed that the Liberty Korea Party remained second out of five political parties, with a support rate of 16 percent, far behind the ruling Democratic Party of Korea, which posted 50.4 percent.

The reform committee was first established as a group to find solutions for the crisis-hit party struggling to gain back trust from the public, as it saw its support plunge under 10 percent after Park was ousted.