[ The Korea Herald – Send E-mail ]
Electronics firms to join govt. arms procurement deal for 1st time
By Catherine Chung
Published : Aug 7, 2017 - 10:39
Updated : Aug 7, 2017 - 10:39
The South Korean government has allowed electronics companies to join a weapons procurement project with a foreign contractor for the first time, enabling them to sell products in return for a contract, an industry source said Monday.

Under an "offset" procurement program, a foreign contractor is obliged to undertake local investment or buy local products when they sign a weapons deal with the South Korean government.

So far, local defense-related firms have mainly benefited from such arrangements, but the government decided to allow electronics, electric and aerospace firms to join the program, according to the insider.

South Korea is planning to buy 90 more air-to-ground Taurus-class missiles from Germany's Taurus Systems GmbH, and local technology firms have been asked to submit a list of products that they want to sell to the German firm, the source said.

The Korea Electronics Association, a lobby group for electronics and technology firms, asked its members to submit the list by Thursday, the source said.

"We can sell personal computers and electric parts to Taurus in exchange for our military's purchase of Taurus missiles," the source said on condition of anonymity. 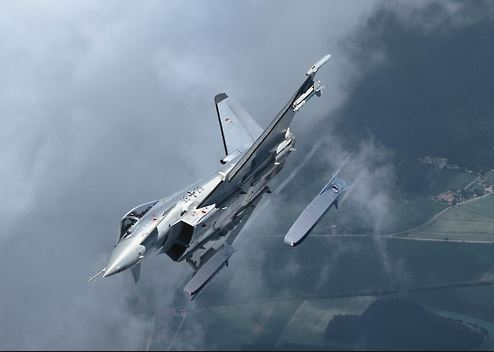 Taurus air-to-ground missiles being launched from a fighter jet (Yonhap)
South Korea received the first shipment of the missiles from Taurus Systems in October last year with plans to sequentially take a total of 170 Taurus missiles by 2018.

The Taurus missile mounted on F-15K fighter planes can hit key facilities in Pyongyang from the sky over Daejeon, 164 kilometers south of Seoul, they said. The missile has a range of 500 kilometers.

The missile deployment is part of South Korea's efforts to build its missile detection and strike system, called the "Kill Chain," which can take out North Korea's missile and nuclear targets before they can be employed against the company. (Yonhap)