South Korea is witnessing a revival in eco-friendly policy on the back of President Moon Jae-in’s promise of a “paradigm shift to a safer Republic of Korea” in terms of its energy supply.

Moon‘s move to increase the role of new and renewable energy sources is bringing attention back to Unison, the leading provider of land-based wind farms in South Korea.

Over the past three years, the company has built 59 out of the 212 wind turbines here but still faced operating losses and weak performance in the stock market.

It was in May -- when the new president took office after a snap election -- when Unison started to show stellar performance in the second-tier Kosdaq market.

The increase rate of Unison shares was the third-sharpest among over 1,200 Kosdaq-listed firms, having surged 137.2 percent to 4,400 won ($3.91) as of Friday from 1,855 won 60 trading days ago. In response to the financial authorities’ inquiry on the sudden rise, Unison said that there was no conspicuous factor.

Driven by the “green growth” slogan under the former Lee Myung-bak administration, many companies including conglomerates rushed to the wind power business in 2008 and in the years that followed.

A leader in the industry with original technologies to build, operate and control wind turbines, Unison saw a 223 percent rise in stock prices from late 2007 to early 2008.

The green growth initiative, however, soon dwindled amid criticisms that the affiliated constructions were rather damaging to the environment, instead of lowering carbon emissions. The global economic crisis in 2008 also weighed on the momentum of the policy.

The downbeat trend consequently pushed conglomerates out of the wind energy sector, with Daewoo Shipbuilding & Marine Engineering retreating in 2015 and Hyundai Heavy Industries and Samsung Heavy Industries following suit in the following year.

After four consecutive years of operating deficit in 2010-2013, Unison was placed under supervision by the Korea Exchange in 2014, a preliminary procedure before delistment. The company escaped the supervision list in 2015 by recording profits in 2014 but returned to the red in 2016.

“(Unlike other companies) we had no alternative (other than the wind turbine business),” Hong Seung-pyo, an official of the firm, told The Korea Herald.

“Had we failed, we would have just headed home unemployed.”

Bringing a change to the long-stalled industry was President Moon‘s plan to hold nuclear power generators and to increase the rate of new and renewable energy to 20 percent of the nation’s energy supply by 2030 from 3.6 percent as of 2016. Of the total, solar power and wind power will account for four-fifths, according to the plan. 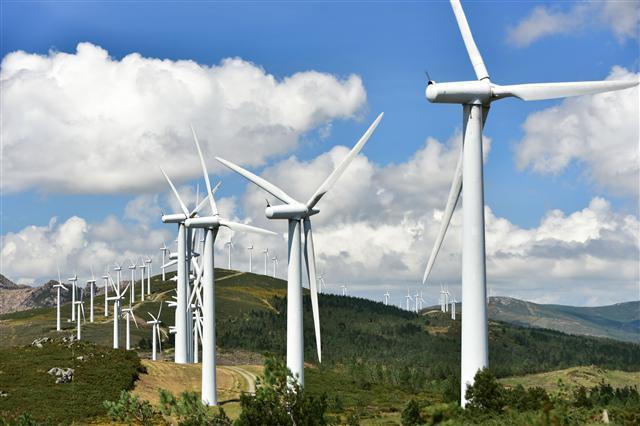 “With few competitors than about a decade ago, Unison may expect to achieve decent performance,” wrote Jay Kim, analyst at Golden Bridge Investment & Securities.

Han Byung-hwa, analyst at Eugene Investment & Securities, saw Unison’s turnaround as the start of a long-term uptrend, projecting its net profit to grow 42 percent on average each year until 2020.

“Unison will be visibly lucrative during Moon’s tenure,” Han wrote in a note to investors.

With two ongoing projects in wind power plants -- one in Jeongam, Gangwon Province and the other in Yeonggwang, South Jeolla Province -- Unison will have little problem meeting its goals, according to Han.

Founded in 1984, Unison was engaged in the wind energy industry since 2001, eight years after it was listed on Kosdaq market.

Tokyo-based power plant builder Toshiba became the company‘s largest shareholder in 2012 with 34 percent of the shares and currently owns 20.9 percent, according to the regulatory filing as of May 15.