Hundreds of education college students in Seoul on Friday protested a government plan to sharply reduce the recruitment of new elementary school teachers next year.

The Seoul Metropolitan Office of Education said the previous day the teacher hiring will be cut by 88 percent because of decreases in the number of students and retiring teachers.

Nationwide, new teacher positions in primary schools will decline by 40.2 percent next year, according to the education ministry.

"It's preposterous. The positions will be axed to 12 percent of this year's. It's even less than one-third of our prospective graduates at the university," a representative of students from the Seoul National University of Education said during a rally in front of the Seoul education office. Some 700 students took part in the protest. 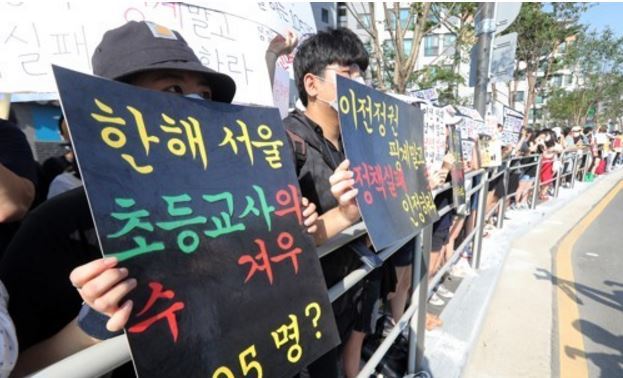 Education college students stage a rally in front of the Seoul Metropolitan Office of Education in Seoul on Aug. 4, 2017, to protest the government`s decision on a massive cut to entries for new teachers starting next year. (Yonhap)
They called on the education authorities to reconsider the plan and guarantee the number of openings would be enough to hire next year's graduates.

"If the cut is really necessary and inevitable, it should proceed with sufficient notification and gradual adjustments," the student group said.

The abrupt reduction runs counter to the government's pledge to increase jobs for youth and the purpose of the state-run college specializing in pedagogy, it added.