[ The Korea Herald – Send E-mail ]
Nepalese worker in his 20s dies from tick-borne disease
By Catherine Chung
Published : Aug 1, 2017 - 15:18
Updated : Aug 1, 2017 - 15:18
HONGSEONG -- A Nepalese worker died from a tick-borne disease earlier this week in South Korea's first case of the illness contracted by a man in his 20s, the South Chungcheong provincial government said Tuesday.

The 24-year-old man, who had been working at a livestock farm in Hongseong, a town in South Korea's central province of South Chungcheong, was diagnosed with severe fever and thrombocytopenia syndrome, or SFTS, and treated for the disease before he died on Sunday. 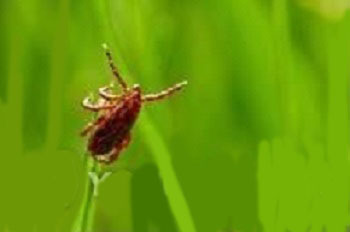 This undated file photo shows a tick that could carry a virus of severe fever with thrombocytopenia syndrome. (Yonhap)
According to local government officials, the worker visited the emergency room of a nearby hospital on July 24, complaining about fever, chills and loss of appetite. He was transferred to a general hospital in Cheonan, a city in the same province, the same day as he showed symptoms of fever and thrombocytopenia, or a low blood platelet count.

The provincial government has reported 14 cases of the illness so far this year and five of them died.

There is currently no effective medicine to treat the disease and the best policy against it is to avoid being bitten by ticks. (Yonhap)