On Friday in Phnom Penh, the two airlines signed a memorandum of understanding to jointly develop new routes and operate their existing routes, T'way Air said in a statement. 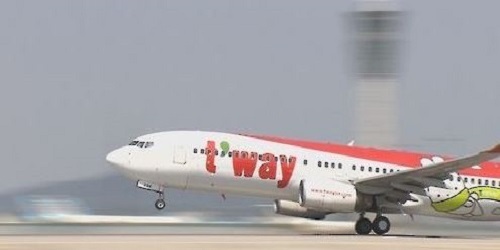 (Yonhap)
Through the partnership, T'way Air expects to strengthen its services on routes to Vietnam and Cambodia, popular destinations for South Koreans during holidays.

Sky Angkor Airlines is an airline based in Siem Reap, Cambodia and is a joint venture between Korean and Cambodian investors. It serves on two domestic routes and 10 international routes. (Yonhap)