[ The Korea Herald – Send E-mail ]
Trump very ‘disappointed in China’ for doing nothing to stop N. Korea‘s provocations
By Catherine Chung
Published : Jul 30, 2017 - 11:16
Updated : Jul 30, 2017 - 11:16
US President Donald Trump expressed frustration over what he believes is China's reluctance to rein in North Korea's increasing provocations on Saturday (US time), after the regime's second launch of an intercontinental ballistic missile in a month.

"I am very disappointed in China. Our foolish past leaders have allowed them to make hundreds of billions of dollars a year in trade, yet they do NOTHING for us with North Korea, just talk," he wrote on his Twitter account.

"We will no longer allow this to continue. China could easily solve this problem!" he said.

On Friday night, North Korea conducted its second test of an ICBM, which flew 998 kilometers before landing off the northwestern coast of Japan.

The United Nations Security Council has been working on a new resolution on North Korea for its ICBM test on July 4. The Friday test will further accelerate the discussion at the UN. 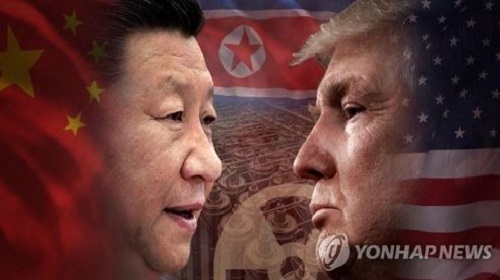 Chinese President Xi Jinping (L) and US President Donald Trump (Yonhap)
Trump's frustration indicates the security and diplomacy dilemma in the region where China, North Korea's longtime ally and biggest economic benefactor, might be more concerned with the prospect of an unstable North Korea than a nuclear-armed one when and if China actively participates in the US-led sanctions and cuts off economic lifelines to the regime.

While the US wants stronger sanctions, including a ban on oil and labor trade, China, dissatisfied with the US pressure to take bigger responsibility for Pyongyang's erratic behaviors, is said to want to stick to the existing resolutions.

The disagreement and friction between the US and China over how to deal with North Korea are affecting the relations between the two major powers.

In June, Washington has designated China as among the worst human trafficking offenders. It also approved arm sales to Taiwan, which China still considers as a renegade province. China's Bank of Dandong was designated by the US government as a "primary money laundering concern." The series of moves ignited vehement protest from Beijing.

Meanwhile, the US House on July 25 passed new sweeping sanctions on North Korea, Russia and Iran.

The sanctions prohibit "any ships owned by the government of North Korea or owned or operated on behalf of any country not complying with U.N. Security Council resolutions from operating in United States waters or landing at any US port."

It also bans "goods produced in whole or part by North Korean forced labor from entering the United States, and sanctions foreign persons that employ North Koreans who are forced to labor in inhumane conditions and are denied access to wages and benefits." (Yonhap)